Looking for a sequencer for long modulations

I don’t know if this already exists, so I’m reaching out to see if there’s anybody know of a module like this. Imagine a sequencer that has a display that looks like an EKG (heart monitor). It can have a variable “resolution” at which it runs, and the display scrolls continually. Of course, it would have a “reset” input to start from the beginning. At any time, you can draw on the display to change the values and it’s automatically saved. 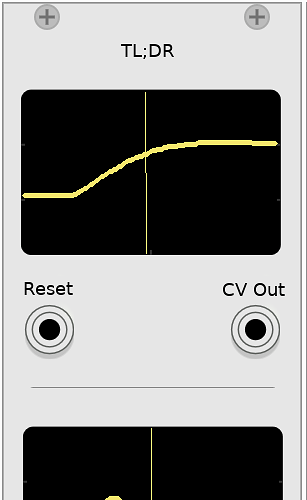 My intended use is to control CV inputs of other modules slowly over time.

check out this one, it’s a new plugin with a scannable array

This is a good suggestion, I’ve been using pdarray a lot over the last few days. I like to use the polyphonic nature of the “play head”. Envy 9 does some of the same stuff as well. Or…the less sensible option: write your own thing with Prototype. Then you can have whatever bizzarre rules you want. 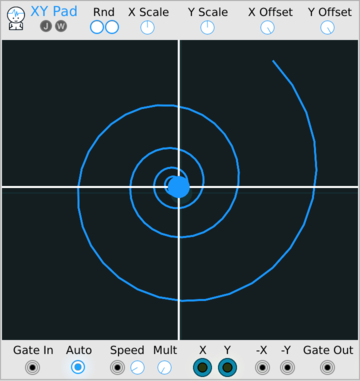 XY Pad doesn’t seem to allow me to edit an existing pattern, or extend a pattern for a long time. I like the XY Pad module, but maybe not for this.

But PD Array is really promising. I suppose I have a follow up question. Is there a module that could provide an incrementing counter to the POS input of the PD Array module? I can use the Range LFO from RJModules, but it doesn’t give me much control over the frequency at super low speeds.

Racket Science Vector Victor will do sort of what you want with less complexity than pdarray, but no graphics until the next version. Should appear in the plugin library soon.

The companion Miniramp module seems designed for this specific purpose.

This is what you need :

How to autorecord KFs in vector mixer

The companion Miniramp module seems designed for this specific purpose.

I tried the Miniramp because, as you said, it’s a companion module and appears in the demo videos. But it ramped too quickly for my needs. The gate input of the Miniramp tells the Miniramp, essentially, “Hey buddy, do that ramp thing!” Which it does. I need more control over the ramp rate if I want it to ramp over, say, 5 minutes.

The Rocket Science modules look like tons of fun, but again, it looks like you can’t extend a recording (or “motion”), or edit it once it has been recorded.

@Yeager Vector Mixer looks promising. I’m going to give it a shot.

PdArray has now been updated with the Ministep module, which can be used to step through the array. This should allow you to do effectively arbitrarily long modulations, as we discussed on github.

You can’t ‘edit’ as such, you can overdub though. New improved version coming soon.