Is there a sampler module that outputs a ramp wave?

Is there a sampler that outputs a ramp wave indicating the position of the playhead?

I want to rig up a crossfading looping sampler. That is, I want two playheads, and when one playhead gets near to the end of the “slice”, I’d like the other playhead to start, and then smoothly crossfade to the new playhead. Rinse and repeat.

I’ve had some success using BogAudio Shaper+ to do this by using the gate output from each decay stage to trigger the next crossfade. This is very much less than ideal since I have to match up the envelope times on the shaper to the length of the sample/slice.

What I’d like to do instead is have a sampler that outputs a ramp indicating position, ideally relative to the slice, but relative to the total duration would be fine since I can trim my samples beforehand. That ramp could then scan an envelope (e.g. BZ-envelope or pdArray~), and I could use HetrickCV Delta to tell me when the envelope starts descending.

PS if anyone wants to create a module that does this automatically, I will send you a bottle of champagne or box of chocolate or whatever you prefer <3

open a request in nysthi github;
I have already the data into simpliciter,
maybe I can reuse the env follower out for it (if enabled via contrxtual menu)

Maybe you could achieve the same result syncing a saw LFO to the EOC trigger of a sampler? Or you could work the other way around, feed a ramp to voxglitch Sampler8X position input and tune the lfo rate to match the sample length

tuning the lfo to match the sample length is something I’d thought would be cumbersome, but now I’m remembering that PdArray has a module that is designed for this https://library.vcvrack.com/PdArray/Miniramp

Frozen Wasteland BPM LFO would be another option: https://library.vcvrack.com/FrozenWasteland/BPMLFO

What a clever idea!

This would work very well for short samples, which prompts some musical ideas I hadn’t previously considered. What I had in mind was samples of a range of minutes, which would make it relatively impractical. OTOH, it has the advantage of automatically adjusting to the duration of the sample (after a few iterations, but still very handy).

Another idea following up on Adam/ComputerScare’s suggestion would be the very slow envelope generator, which is parameterized by time rather than frequency.

In that idea, you could use the Stalys 8 Clock to Volt/Octave module and control multiple LFOs with it (2hz/120bpm is 0volts). 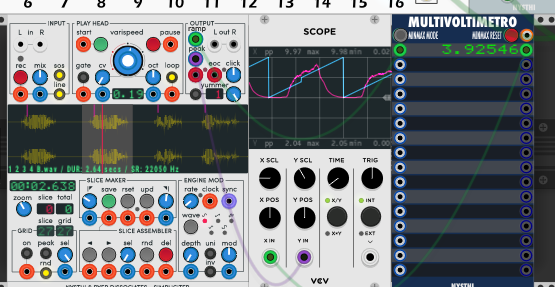 Ask and you shall receive!

Thanks so much, Antonio!