How much do you care about the visual design of Rack Modules?

I like the variety. It makes the interface “readable” at a distance, i.e. you can get a sense of the plugins being used

At first I look what a module can do and how that sounds, but when the gui delays my workflow, I mostly don’t use it very often. But there are not much modules I don’t use, but sometimes you have to get used to it. My favorite designs are Lindenberg Research, Vult and Audible Instrument. For some developers I made custom skins that better fits my personal viewing habits.

There are definitely modules I would use more often if I thought they were better looking. There are also modules that I instinctively reach for regularly, in part, because they’re so good looking. That said, there are probably about four classes of modules (when it comes to appearances) in my mind:

Just my own two cents of course…I’m just one guy on the internet.

What get’s me the most are:

Like I said to Antonio: If the NYSTHI modules had a clear and consistent UI it would be a killer plugin. He agreed. As it is now I sadly reach to e.g. NYSHI as a last resort, but I wish it wasn’t so.

For a model of great layout I would say Vult, except… he has taken to using too small fonts lately, which is a pity.

Modules where fontsize is much smaller than average.

What would be your minimum acceptable font size at 100% zoom?

If the NYSTHI modules had a clear and consistent UI

and decent docs too. Ah, the pain of figuring out how the heck they work…

If you develop clean or eclectic artistic designs for your modules doesn’t matter to me. The module just needs to be functional as provide options to help get your ideas out of your head in to other peoples ears. Coming from a guy who thinks that sloths are the true kittens of the feline kingdom.

In defence of NYSTHI, I find most of the modules intuitive enough not to need docs, and the ones that are less so make for a nice challenge. Considering they’re free I think they make a great asset for VCV, I just wish they were also open source.

After looking at the source code for Modular Fungi LightsOff I don’t think there is any nanovg trick. Looks like it draws a giant translucent box over the entire rack, and then re-draws lights and ports over the top. Take a look at LightsOffContainer::draw method.

Modules where fontsize is much smaller than average

Good point. I recently switched from a very old 17" monitor to a “4k” monitor and VCV looks so sharp and good at “retina” resolution that I can see how if a developer only had a monitor like this that they would mistakenly use fonts that are too small to read on a “normal” monitor.

Ah, that’s just what I needed to see, thanks! I changed the MixMaster VU meters to derive from LightWidget instead of OpaqueWidget, since those are part of what gets redrawn, and now those VUs look nice in the dark too! 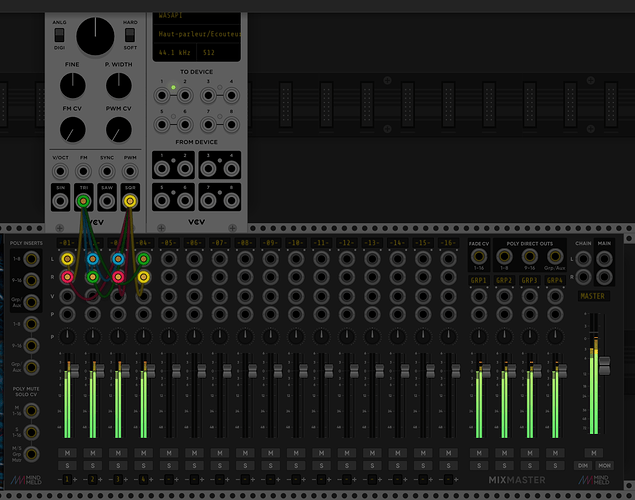 I think basically like Andrew says: Stick to the approx. size of the VCV/fundamental modules and all is Ok. Consistency, in a way, is even more important than absolute size, because if all modules use roughly the same font-size, then you can zoom in until it’s right for your eyes, and all fonts are readable.

Ah, the pain of figuring out how the heck they work

Yes, but actually a clear and consistent UI can help a lot with that.

Personally i don’t care too much about the visual design but about the legibility instead, as an example the Strum’s VCV Modules very difficult to read. Another example are the µmodules from NYSTHI with a very nice look but very tiny to my eyes!

now those VUs look nice in the dark too

Fantastic work! My eyes thank you

Do the little filter LEDs show up too?

Interesting. Just looking at the pictures, it seems like the problem might be that they use a font that isn’t very legible? The size doesn’t look too crazy.