I’m happy to deliver you today 7 new modules! as long as some bug fixes and major performance improvements. All my modules are open-source (GPLv3-or-later). The module is divided into three parts. On the left are two VC Neurons circuits, and on the right the original Combiner circuit.

Each Neuron is comprised of three lanes: One input, which is multiplied (four-quadrant multiplier). After multiplication, a VC offset is applied. The three inputs are summed and run into a half-wave rectifier and comparator. The comparator’s bipolar output is summed with the rectified signal. SENSE adds a positive DC signal to the mix, while RESPONSE affects the magnitude of the comparator’s output.

The Combiner circuit consists of two lanes (with four-quadrant multiplication and vc offset), normalized to each Neuron’s output. The output of the two lanes runs into several logic modules:

This might seem overwhelming but just experiment: feed it with LFOs, envelopes, sequences, oscillators, or even itself and watch the complex waveforms it generates. You can use just some parts of it and it becomes a mixer/ring-modulator/waveshaper/logic module.

This module is an 8 step shift register: At each incoming CLOCK trigger, all output voltages are shifted down one position and the value of IN is sampled into the first output.

A typical use would be to generate canon melodies.

This module is what its name indicates: 8 VC comparators: It outputs a gate whenever the input signal is superior to the value signal (defaults to 0).

This module is 8 four-quadrant multipliers or ring-modulators (with attenuversion of the Carrier). A 5V voltage is normalized to the Carrier input.

If no cable is plugged into an output, it is summed to the next outputs.

This module is an 8 three inputs unity mixer.

If no cable is plugged into an output, it is summed to the next outputs.

This module is an 8 three inputs subtracter.

This module is 8 boolean Not operators: they invert the gates they receive as inputs.

This module inverses the negative portion of any input voltage.

Small Tip: Have a look into the library

Awesome! Glad to see the additional features added. Looking forward to experimenting with this later.

Thanks to you, your modules are really inspiring!

At the time I left the message it wasn’t there.

Thanks, I got it from github this morning. No problem with the build, I’ll play with the module later this afternoon.

V1.0.1 just got released, with minor tweaks to the interface (fixing alignments and overlapping objects): 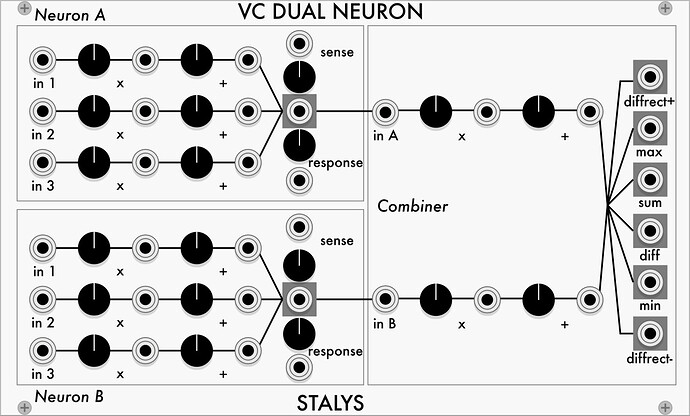 Hi @stalysmusic - this is not mandatory according to #announcements current rules but…to edit the first post and adding a link to https://library.vcvrack.com/Stalys/VCDualNeuron is going to be helpful

At the time I left the message it wasn’t there.

Sorry for an easy questioni, but i couldn’t find an instruction how to install it. This is what i did

I used “find” command for plugin.mk and couldn’t find it. Thanks in advance.

I guess i figured it out, but it sure isn’t info that easy to find for a newbie.

Perhaps i see it wrong, but it might be an idea to add such info in the README or INSTALL file? Anyway, sorry for the noise. Shall i remove this comment, as it is announcements section and not support?
stalysmusic (Denis Dubo Chevalier) November 28, 2020, 4:38am #15

Thanks for pointing out! Actually you can clone it wherever you want, just make sure to have RACK_DIR exported with the path you’ve extracted RackSDK.

You can follow those instructions for more details, notably on the dependencies and SDK installation.

I’ll take some time ASAP to add this to the repo’s README.md.