Is this with Windows or a Mac?

With a Mac you may not need third-party software, and can set up MIDI connections with the Audio MIDI Setup app.

In my experience, MIDI is pretty easy to set up between a Mac & iPad; as is audio from iPad to Mac. Audio from Mac, through iPad for processing and back to Mac; not so much. It seems to me this is likely by design, as iPad apps are far cheaper than their Mac equivalents. Apple (and those that develop for those platforms) would prefer that you not use your iPad for cheap external audio effects & processing in lieu of buying the more expensive desktop software. This is my guess anyway. I’ve been curious about Studiomux, but the poor recent ratings have discouraged me.

If you’re asking about Windows, though, I have no idea.

(Oops - meant to reply to thread, not michael1964 specifically. Sorry.)

I dont have host and wasnt sure to buy it if it doesnt work.

I own both, windows 10. I will check if the studiomux vst/vsti will load into Host. I do not see a reason why it wouldn’t. Bigger problem though, since the iOS 14.x update, Studiomux does not run on my iPad Pro. Many are having the same issue. I have however can use midimux(midi only) I will report back later this morning. As for Host, you cannot go wrong if you have any destktop VST/VSTi… a great module! Cheers

…confirm, it works. I forgot that my iPhone6+(iOS 12.4.9) was connected within my setup. It can still run studiomux (audio&midi). Hope this helps @thisguy 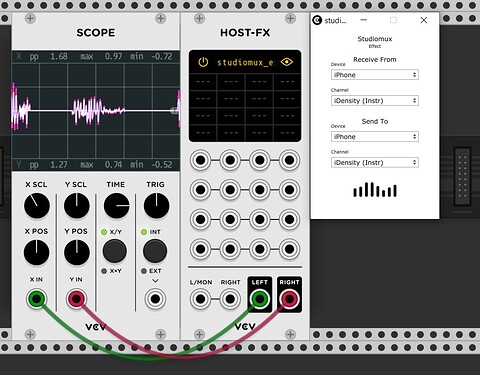 Hi, i’m not sure whether you already own the Studiomuxer app or not?

Just a headsup: apparently to use Studiomux, you will need a helper application for the mac/pc, that is/was supplied by an external party.

The site that is described as supplier of the application is not in use anymore, audiomux.net, and the last update for Studiomux was 2 years ago.

If you mean that under ios 14.xx Studiomux does not start you can try a simple restart. I read that somewhere and it worked for me right away.

Independent of the studiomux app, “host” is a must have.

sir, you deserve the “gold patch cable” today. Yesterday actually, cause that’s when as you suggested, I shutdown and restarted my iPad Pro and now Studiomux loads fine. You would think after all these years dealing with and supporting windows o/s, I should have automatically known to, “try rebooting and see if that fixes the problem.” Thanks again for the tip and fix! @thisguy I retract my earlier statement regarding iPad 14.x iOS and studiomux. That said, Host will run the same version on the workstation as the screenshot - so yea it works. Again, as others have said, you cannot go wrong with the Host purchase. cheers

Looks like maybe it (the helper) is to be found here now:

…and it appears work on a new version has recently been revived:

Hi, finally we uploaded the first version of the studiomux beta. You can now also download the beta via public link, this seems to be more convenient :). Details about the current state of the beta and server downloads can be found here: ...

You help where you can

Yeah there is some gossip about that over at Audiobus forum, so that would be nice after years of no development.

I’m happy to report I was wrong… I took a chance and bought the current version of studiomux from the app store and downloaded the current (not beta) version of the studiomux Mac Server from the Zerodebug website. To my surprise and delight, everything works. I can get MIDI and audio between Rack and my iPad in every combination I’ve tried so far.

The big caveat is that I’m using MacOS Mojave (10.14) on a 2018 MacBook Pro / iOS 13.2 on an iPad Air 2. The road to here is littered with apps and devices that stopped working forever when their owners acquiesced to one of Apple’s near-obligatory one-way backwards-incompatible upgrades. There’s plenty to suggest from the reviews on the app store and the comments in the Zerodebug forum that this can happen to studiomux with some combinations of OS versions. YMMV.

As mentioned above, if you don’t need to pipe audio to & from your iPad, there may be more reliable methods. However this does work for me, and it’s something I’ve wanted to be able to do for a long time, so thanks for mentioning it, @thisguy.

I use studiomux both midi and audio in vcv, works great, I use it to record apps, midi control vcv to iPad, iPad to vcv, and even hardware midi controller to vcv to iPad to control apps and vcv at teh same time, works perfect

What OS versions are you using, @pyer?

last one up to date, though lately I have a problem: sometimes studiomux app wont load at all, I have to restart teh ipad and it works

I had luck with the latest beta. I think soon there will be a updated much better version of studiomux

wow really! 3 year after and romors of abandonware, this is great news! “When it works”, it’s by far the most simple and powerfull solution

I hope the studiomux 5 works well