Excuse the ignorance, but how exactly does DR differ from regular rampage?

ShapeMaster’s random settings offer interesting possibilities for generative music with a built in quantiser and glides/portamento. The new node triggers function gives you a trigger out (of adjustable length) for each randomly generated node. I also like the fact that you can then manually tweak what it generates.

We are also currently working on a new random mode for it. 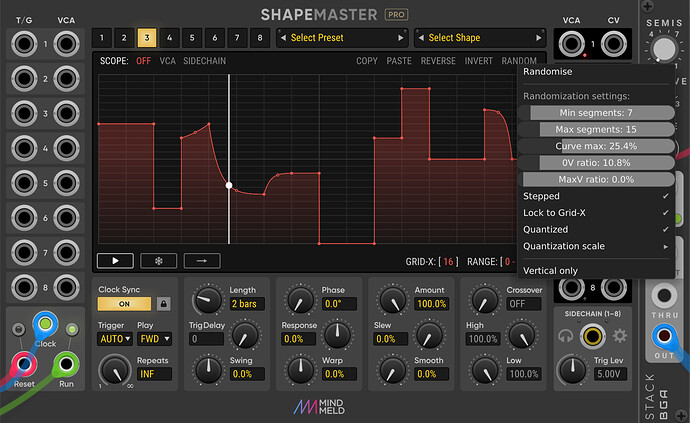 I’m really looking for some nice, simple, example patches utilizing the rampage in such ways! care to share something with just befaco+fundamental modules?

Here’s a patch that demonstrates one of the generative properties of rampage.

There are 4 voices in the patch: Each has a SEQ3, VCV QNT, VCO, VCA, & Rampage. The quantizers are tuned to a C Aeolian scale.

The Rampage is set to Cycle (the swtiches below OUT A and OUTB). You have to click the TRIG button to start each Rampage cycling. To end the ‘performance’ I turn off cycle on each of the 4 Rampages.

Each Rampage’s OUT A goes through an VCV 8VERT channel to the the next Rampage’s EXP. CV input, and the 4th Rampage modulates the first.

The 4 oscilattors are mixed with a VCA MIX. You can make the patch more compact by using the VCA MIX channels as VCAs but I like the display you get from the VCV VCA module.

The mixed mono signal goes through two VCV DELAY modules to add some space to the mix. The Delays are fed by two VCA MIX, to have the left channel feed back to the right and vice versa.

Finally before the AUDIO output, I use a VCF in highpass into a VCA in lowpass, just to moderate the exterme low and high frequencies.

I set the 3 SEQ3 to as best as I can reckon tones that aren’t insanely low or insanely high. SEQ3 knobs have a range of -10v to 10v which is 20 octaves of pitch range. The usable range for music is probably in about the -3 to 5 volt range. You can use the Befaco A*B+C modules to do that, but I just tuned the sequencers to stay in the audible range. 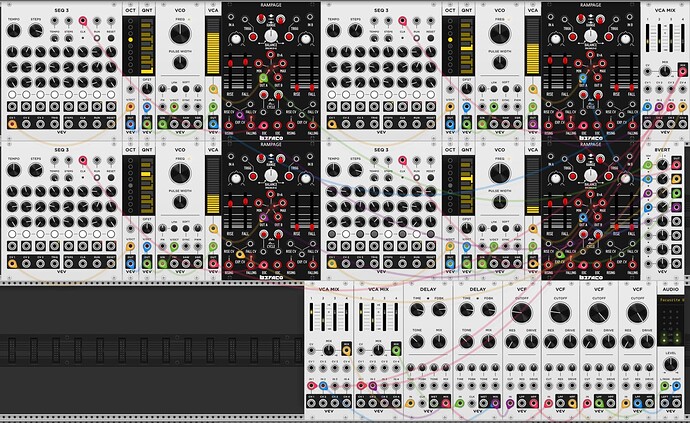 it has a degree of randomness, thus drunken

I’ll humbly suggest the two modules I’ve written as useful for some forms of generative creation. That is largely what I intended them for.

I’ll admit that my current documentation is mainly for explaining what they do, not how to create generative effects with them, but the first Drifter example points to something that might interest you. It kind of depends on what “generative” means to you, I admit.

I’ll look into these. I’d love to make my own modules at some point but I don’t know how to program.

If I make a patch with them I’ll let you know! @ablaut

Edit: Made a patch! It’s very simple (only 3 elements and not too much modulation), but I think these modules (at least drifter) are gonna be added to my fixed rack!

Here’s the patch itself:

Drifter seems interesting. I think I have an understanding of how it works, but just a quick question: Does the input expect gates, triggers, or something else? I understand it’s a function generator but is the X coordinate driven by a clock or by CV?

Edit: Nevermind I figured it out lol

Edit: Nevermind I figured it out

and the answer is: …

JW Modules: GridSeq, 8Seq and NoteSeq. GridSeq and 8Seq have right-click menu functions to change the gate, NoteSeq has polyphony. They’re awesome and they’re simple. Jeremy easily has the best random functions in all of VCV. Touring Machines are nice and all… but they’re basically just Shift Registers.

Computerscare horse-a-doodle doo - just use its EOC to trigger a Sample and Hold and modulate pattern and density. Very useful to make generative percussion sequences with shifting weights, ever-changing patterns and CPU-friendly…: 16 sequences from one small module - just route its poly output through a Branches/Chances/Baseliner to add some more controlled randomness. 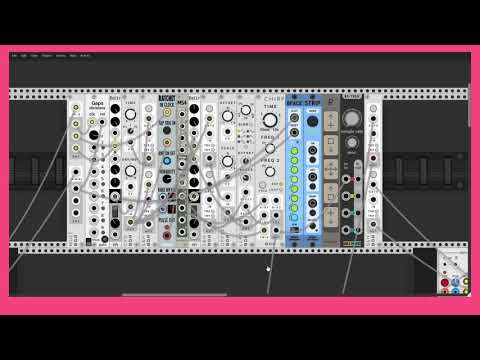 This is my Pet-Bird. It’s a bunch of utilities., a VCO and 8Face (with presets for the VCO and some utilities). This fella is a prime example on what utilities can do if you just patch them up in the right way. The bird will sometimes shut up for a while, then suddenly fly into a rage, it has streaks of eloquence as well… but most of the times its just chirping around. Signal delays, switches, clock dividers, attenuators, comparators, logic and modulating them with LFOs (bogaudios LLFO has a random waveform AND a smoothing option in the rc-menu… its quite perfect). You should learn as much about utilities as you can. Counters, Slope Detectors, ANDORNORXORNOTETC, Attack Decay envelopes as modulatable trigger generators,

But the greatest beasts of generative Sequencing come from Frozen Wasteland. Gardener, Seeds of Change and ProbablyNote … when paired with stoermelders 8Face… are an insane combo of inexhaustible music generation that, when set up with time, care and a clear image/idea of what it means to “compose randomness”… will leave you with a setup that will play itself: forever. I know… because it took me so long to set up the first few times that while tweaking minor technicalities or looking for solutions for whatever was still bugging me… I would sit there 8-10 hours straight, keeping the whole thing running. Here is a very minimalistic setup using one SoC as a random generator to randomise a second SoC, one Gardener with 8 Presets to control the SoC and various expanders… then quantisation with probablynote… a bit of pitch shifting, a whole bunch of Bivios for probability routings and switchings and all my Kontakt Libraries… had I used one more row for utilities… it would’ve been much more interesting. But it was supposed to be an example to show off the Gardener/SoC combo. 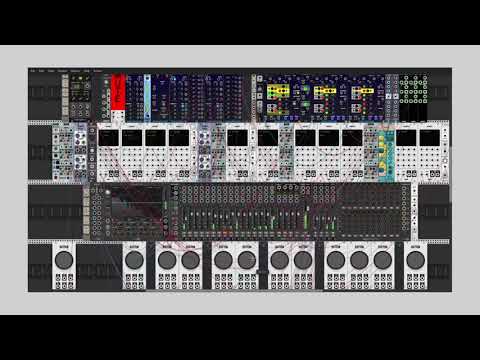 this is actually a better example. An SoC ‘Piano Solo’ 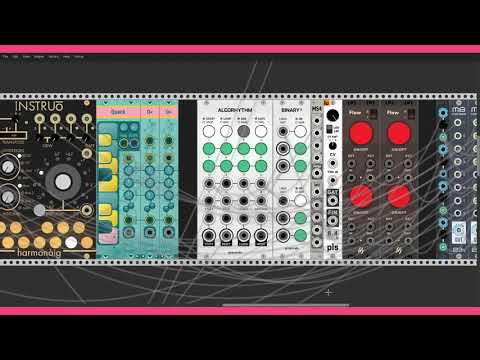 You will want to look for anything that generates movement over time but keeps within context. Vult has a few interesting modules: Caudal (algorithmic chaos generator), Anima, Feigen, Lapsus… stoermelder is your best friend: cv-map, 8face, transit grayscales algorythm is simple but extremely effective. count modulas clocked random gates is a genius module… docb made a 16 channel, 2hp mini version of it. Axioma have some really weird CV and trigger generators… Bifuricator, Tesseract and Ikeda Mockba Modulars S&H Eight is a quintessential Sample & Hold with global clock, 8 S&Hs, probability, clock division and range per channel. - say its 50% probable that every 64 clock ticks… a random voltage is generated… which goes to 8Face and changes the preset of a module.

That is one of the most important parts in generative music: setting up chains of events that eventually happen and change/start/end a movement. this is how a narrative is formed and the isolated pieces of a set are traversed like a landscape. ASModules has: Launch Gate, Kill Gate, Steps, Flow, Triggers, Signal Delay, CV 2 T NYSTHIs RAEL, Bridges, Sous Utils

Geodesics Fate adds/subtracts adjustable, triggerable, probable notes/voltage from a sequence you feed it - or mixes two sequences instead of you plug in another. a 6 step sequence can be turned into a repetetive, but changing and moving theme.

last but not least: another important part of generative setups is the placement of sound in the stereo field. there are some helpful tools to manage that in my module collection: https://community.vcvrack.com/t/ja-modules-collection-open-for-beta-testing (use polyphony to move all channels at once and poly tools to create cascading voltages… etc.)

a choice you won’t regret when it comes to generative set-ups is: VCV Sound Stage. An interesting companion for that and many more scenarios is Magus Instrumentalis Ars Memorium (a 16 knob preset saver with interpolating morphing map… with random function, sensitivity, adjustable grade of morphing between presets). Here’s a rather strange example… the only sound source are 4 parts of 1 sampled recording of a fly. Everything you hear is the fly… even the drums. - placement and movement of sound is a big thing… and helpful solutions are practically non-existent (at least there are poly to stereo spreader). 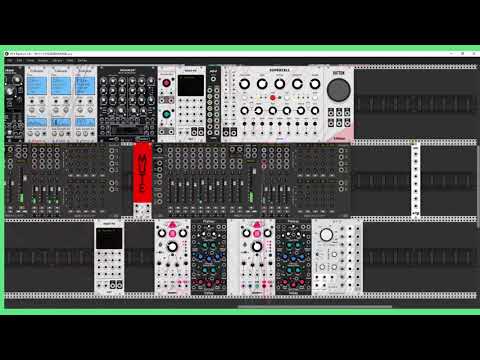 its those daily necessities that barely ever have a manual, of course no youtube feature and are rarely ever recommended that have made modular already generative when a synth was still taking up 7 square meters. Attenuators and Holds can make a ‘random generative sound source’ out of any audio… you’d be surprised what an insteresting drum sequence a field recording of a busy street can make if you have an envelope follower and an attenuator (or an amp, depends) - a comparator would also do. fancy modules are awesome - and most of them started out as an utility/basic sound generator patch neatly packed in a box and with soldered on controls and patchable holes. 70% of all gear contains near identical parts, just patched up in a different way. If you ever need something done and there’s no module that explicitly does it… scouring through manuals, tutorials and forum posts in hopes to find one… often takes longer than just patching it up yourself (in my experience).

Wow. Too long no internet interactions… its the Gil-Scoitt Heron version of “I’m new here”… and then writing too much. Kudos, have fun!

Holy… This is a MANUSCRIPT. And I mean that in the best possible way. It’s gonna take me a while to deconstruct and digest all of what you shared in this post. This is really something fantastic. Thank you. I’ll be sure to pick up Sound Stage when I get the chance; I was debating it but you just sold me on it.

Your bird chirp generator is gorgeous. Your jazz piano solo sounds like something out of Zelda: Breath of the Wild.

You’re easily a more knowledgeable and skilled patcher than I; perhaps it’s even just talent! Clearly I have much to learn; I felt like a genius when I figured out to use a NOT gate and a VCA to prevent a retrigger or note change during an envelope cycle.

Would you mind posting a patch file or two so I could just look through them and absorb?

Interesting. I’ll give it a try.

Here’s the one that I used to try out ideas on.

Bitwise by Chortling Hamster Modules (that would be me) is four sample and hold circuits whose triggers are affected by a CVable “pattern grid”. Might be worth a look.

I finally picked up Sound Stage… WOW! That module is really something. I still haven’t been able to try any of your recommendations - was super busy with finals - but I’m ready to spend some time to learn and just tinker.

I recently did another generative patch with Hallucigenia being the primary melody driver, but I also used @Patheros’ Quantum Compass to add some more random.

I posted the track over on this thread. Not sure if cross-linking is allowed, so if it isn’t I’ll remove it!

Here’s my newest track. I made this one entirely in VCV as well. Sometimes I’ll use external hardware synths (controlled by CV > MIDI), but not this time. I picked up Sound Stage per recommendation of a kind user and used it to modulate the main key sound you hear at the beginning and through the whole track.

You know, I was thinking about what you said and I tried to set myself up with a blank rack and… I absolutely lost all idea of where to go next. I was overwhelmed!

The possibilities were endless! Yep, that can feel overwhelming.

I save my work to a new file quite often so I can experiment but easily go back if needed. I also undo quite a lot.