Does VCV Host introduce a delay?

I am assuming that host operates like most VSTs, and there will be one “buffer” of delay between a CV change and a change in the resulting sound. But is that, in fact, true? Asking for a friend. 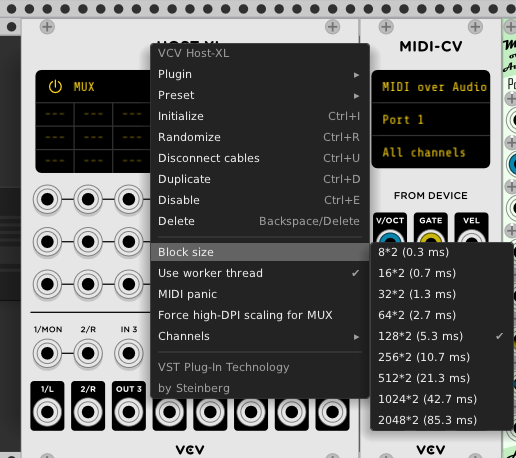 Thanks! I assumed it had to, but wanted to be sure. I would also guess at 8 samples the CPU usage would rise, and some VST would not work with buffers that small?

The “Use worker thread” option puts the VST into its own dedicated thread, and doubles the latency as a result (that’s what the *2 pieces are saying). Switching that off runs the VST in one of the Rack engine threads, and introduces less latency.

Performance at low block sizes is surprisingly good with many VSTs, but obviously that varies from one to another.

cool. tx for the info. I think 8 was a good minimum to choose. I’ll bet there are some VST that use AVX registers and would crash with a smaller block size.