Displaying message on module only on update?

Hello! I’m hoping to show release notes in my module when it’s updated, like so: 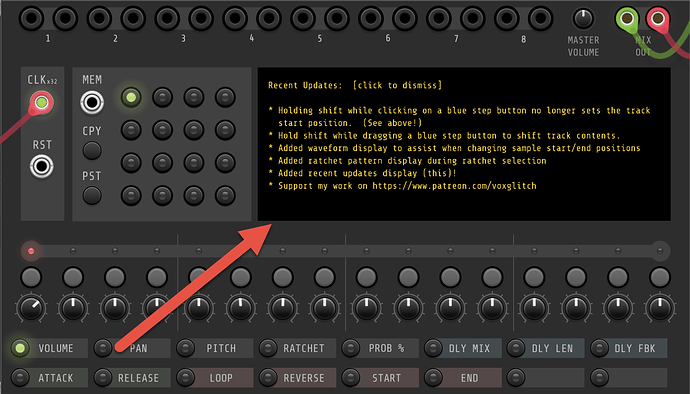 I only want this message to display once, then only appear again once there’s a new version. My first attempt looks like,

In short, the code is saying:

Maybe I’m on the right track, but my attempt to rename the res/release_notes/groovebox.txt file is failing. I can’t tell if that’s because Rack doesn’t have permissions to update that file. Any suggestions would be much appreciated!

You could also do it by tracking a value in json. Basically increment a number every release. Then check when you load the module if the numbers dont match, and set a boolean the module you can use to know if you should show patchnotes.

…is the proper place to store information that’s shared amongst my modules. It also looks like there’s a way to read the current version: VCV Rack API: rack::plugin::Plugin Struct Reference

I should be able to store the latest version in a voxglitch.json file, and upon load, check if the version has changed. I’ll give it a shot!

It might be nice to put an item on your right-click menu. So that a user can access the latest release notes if they missed them, or want to refer back to them.

It might be nice to put an item on your right-click menu. So that a user can access the latest release notes if they missed them, or want to refer back to them.

In the short term, this might be the way I implement it. It’s surprisingly involved to create a system for tracking all of the module’s “newness”, and I don’t have time to sink into that right now. I might just have the right-click option to display the release notes.

VCV Rack already has this feature. Simply set "changelogUrl" in your plugin manifest. 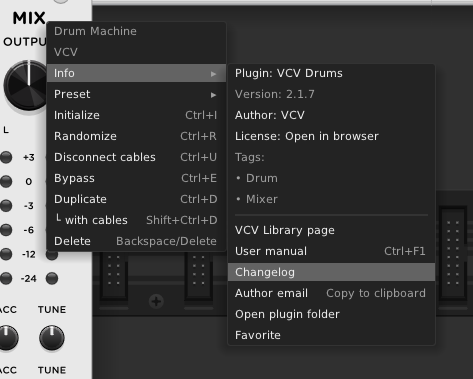 VCV Rack already has this feature

Has that been there since 1.0?