I have been wanting to learn 3D animation for some time now, so yesterday, after watching some tutorials the past week to familiarize myself with the workflow, I finally installed Blender 2.81!

Today I wanted to try and work out an idea I had, without referring to tutorials. This proved to be quite challenging but also made for some happy accidents. I was inspired by Ducky 3D and his videos on creating seemless loops for visualization purposes.

Instead of his usual method of moving the camera through a fixed scene, I wanted to put the camera inside a rotating torus to simulate a flight through a tunnel, over time rolling the camera to change direction. Then I messed around a bit with color chenges and rotation, waited for 2,5 (!) hours to render a 10 second loop, which I then copied 24 times and put a recent VCV Rack jam under it.

I must say that, especially with some music, I am quite pleased with the result, although I still have some ideas I would like to implement.

This jam is a small outtake from a night of testing out the Poor Laika patch and has the Behringer Crave playing a randomized arpeggio synced to VCV Rack, modulating its filter with the square wave LFO, the Yamaha PS-30 playing a taped down power chord, going to VCV Rack into a Laika filter by Lindenberg Research.

Then I messed around a bit with color chenges and rotation, waited for 2,5 (!) hours to render a 10 second loop

About 25 years ago a friend of mine tried to render (in Imagine, a 3d package that was given away on the cover disk of Amiga Format) a low poly rotating heart. The animation lasted about a second and took 2 days to render (on an Amiga a600). He viewed the result and was surprised to find that all the frames were black. He’d forgotten to put any lights in the scene.

Here’s kind of a mesmerizing flight through a fluctuating neon lit organic tunnel made in Blender 2.81, accompanied by a piece of a recent jam in which I sent VCV Rack through my guitar pedalboard. I am playing the bass part on my MIDI keyboard and the Behringer Crave is providing a random arpeggio.

As if Rack hadn’t made me realize yet, Blender is definitely convincing me I need a new graphics card! This animation took just under 10 hours to render, and although I’m quite pleased with the result thus far, even in this low resolution, I’m really looking forward to add some quality and detail back in as soon as my new graphics card arrives! The long dark fade in in this one is a testament to the discouragement I feel with the current long render times with regards to fine tuning and finishing a project.

I’ve been experimenting a lot with 3D animation in Blender lately, and thought I’d try and sequence a week’s worth of results under a recent VCV Rack jam.

In this one there is a lot of liquid chimey FM with a touch of glitch, at a slow ambient pace to complement the dreamy watery visuals.

Mainly Fundamental modules were used as sound source, the Macro Oscillator is used to FM just about everything, with some drums by Vult’s Trummor2 and some gates with delay pinging a filter. For ambience there are the usual Plateau and Chronoblob, with the addition of a Nysthi Convolvzilla that I believe had some speaker cabinet impulse response loaded.

After being inspired by the sounds in @Omri_Cohen’s tutorial on Karplus-Strong synthesis, I started experimenting with this amazing technique, and quickly found myself in Dark/Forest Psy territory.

I tried out several different filters and delays in multiple configurations to explore the possibilities, of which I’m sure I have only just scratched the surface.

So much going on, my brain was about to explode!!!

I just went live on YouTube for the first time, playing guitar over a glitchy patch, this is so much fun! In the end I started hearing some unwanted glitches so I ended the stream, but luckily they didn’t come through at all!

I will be going live in a minute!

This time I am using Nysthi’s Quadsimpler with my own bass guitar samples and some free acoustic drum kit samples from Judd Madden to create a virtual band to jam with, something I’m really missing at the moment.

In this one I’m playing my guitar into the sync input of several VCOs, sometimes switching one to soft sync to get a lower octave, and at one point I also use the guitar’s sound as an FM source.

A sample & hold is modulating the frequency of the VCOs, two Bidoo TiAREs with some phase modulation and a Fundamental VCO are bundled into the HP, BP and LP inputs of Vult Tangents filter, an additional Bogaudio VCO is going through another Tangents, a Bogaudio 8FO is modulating the filter cutoff frequencies, all going into a VCA with a Bogaudio envelope follower to control the levels. This is then all going through Vult’s Disjoint filter into Bogaudio’s Switch88 for some sound shaping flexibility, with the usual Chronoblob delay and Plateau reverb for some space.

A 5/4 beat is provided by Vult’s Trummor2 and a bass voice from Bogaudio’s VCO going through Vult’s Tangents and Slap.

As I was preparing this patch for uploading to Patchstorage because I just have to share the fun, again I couldn’t stop playing! This sound is so mesmerizing, it’s like a nice swooshy fuzz with phasing qualities, and the PWM and FM also bring some nice textures.

I keep trying out oscillators to see how they react, and today found the Additator by Bogaudio to have a very nice timbre when used in this way.

Here is the patch that was used in the live stream I did on 04-04-2020 with my friend Bas providing live visuals from his own home.

I’m uploading this in response to a request by 7177.

Since the Behringer Crave played an important role in this patch, I included an early version of a VCV Crave recreation I’m working on, and something really close to the flanger I used. At the moment it is set to sequencer mode, but can easily be adjusted into the drone and other sounds that can be heard throughout the jam.

This was a test run of a matrix synth I’m working on, which is kind of inspired by the huge EMS Synthi 100, although I guess the way I constructed it, it’s more like a VCS3 on steroids, with its:

To connect this all, I needed a total of 24 Bogaudio 16x16 patch matrices and 49 Strum MentalSums. Needless to say my computer has a hard time trying to cope, so this was recorded with half of the modules disabled, which made it somewhat possible to make out what I was doing, while still giving me a lot of flexibility. 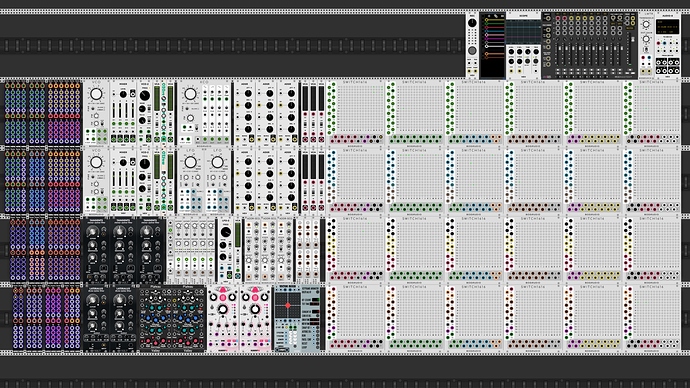 I was quite happy with the result, and found it to fit quite nicely to some of my recent animations, which rely heavily on the concept of spin and flow.

to create a virtual band to jam with

This sound is so mesmerizing