Thanks Dave for assembling this patch, just playing with it now, alsorts of rhythms are coming out of it-8bit sequences, Industrial Japanese noise, YMO.

It’s cool, right!? Such a simple patch, especially if you eliminate the slew limiting (but I wouldn’t want to do that). Yet many cool sounds to discover, and plenty of happy surprises when you start combining clock divisions.

Be sure to let me know if you dial up anything extra tasty with the concept and post it.

I still love Substitute though. You are basically getting 6 oscillators which use about the same amount of cpu as a single oscillator. And it sounds good!

Great - thanks for the feedback! I’ve got a newer version of the Subharmonicon emulator - version 4

Here is my "final" version of the simulation of a Moog Subharmonicon using only free... 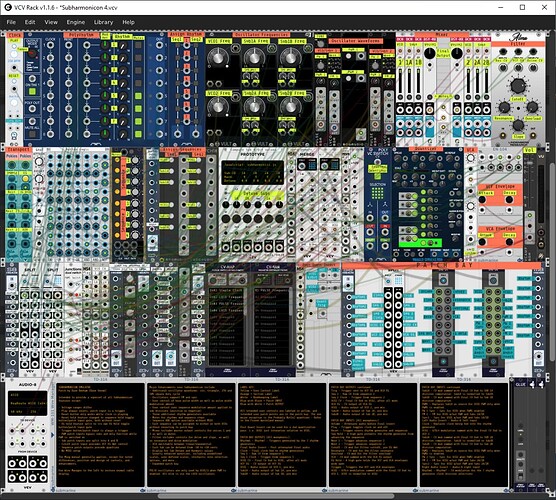 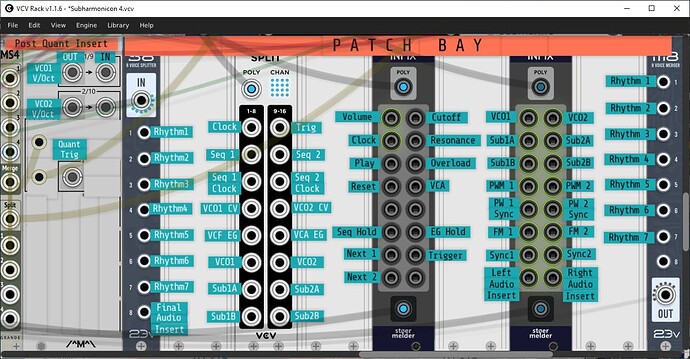 Here are the major changes from the prior version:

Please share if you create a cool patch with the emulator.

Here is a demo video where I pair my Native American flute improvs with two patches created from the emulator. The link takes you directly to the VCV pieces, but I encourage you to listen to the beginning of the video for some really cool contrabass overtone flute improvisation - it has a very unique sound. 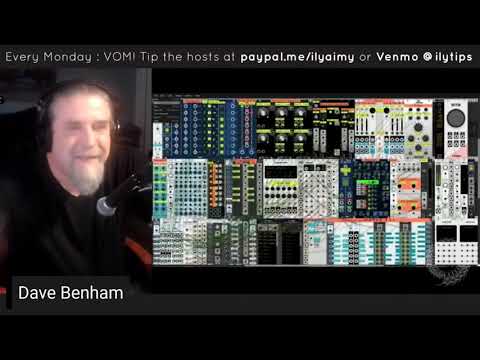 Dave, you’re killing it! That contrabass overtone flute sounds amazing and your meticulously labeled & documented emulator is truly impressive. I really enjoy your flute + rack improvs and the spaces you create with them.

Thank you so much! A response like that really makes my day.

There is quite a bit to unpack in this patch. Awesome, thanks for sharing that meticulously created beast of a patch. 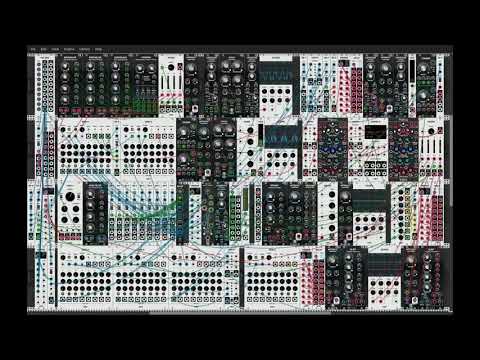 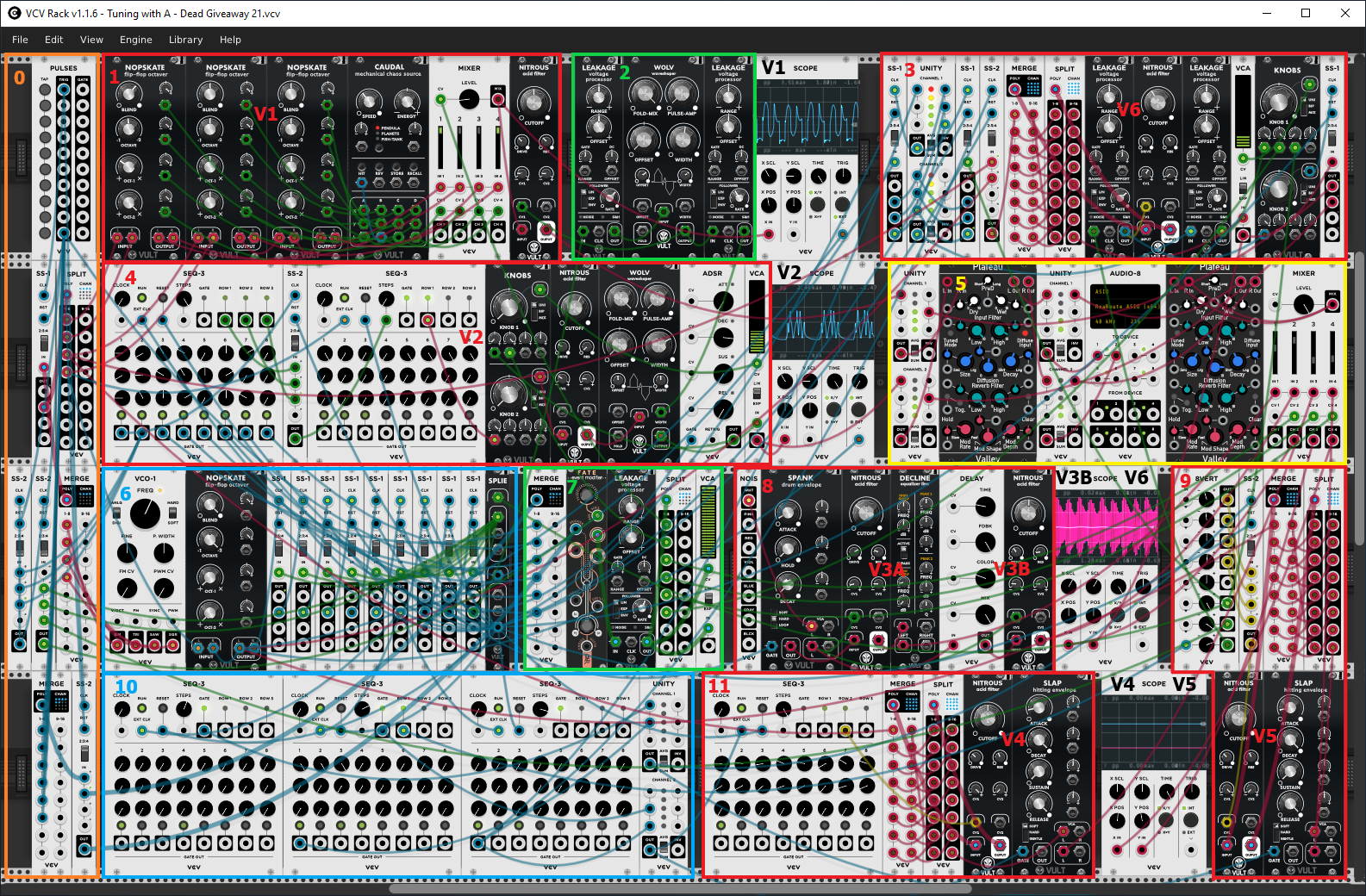 Tuning with A - Day of the Dead Give Away 2021 | Patchstorage

Here is my entry for the Day of the Dead 2021 give away. Contest details...

The title “Tuning with A” is a poor play on words, where “tuning” not only refers to the modern orchestral standard of tuning to A440, but also I’m inventing a definition of “tuning” to mean “writing a song”. This is a slow moving, scripted ambient patch where almost everything is derived from a single VCV VCO-1 droning at a fixed pitch of A4 (A440). It functions as both a sound source, as well as a clock. I use lots of clock dividers and sequencers to establish subharmonics, event timing, complex polymeter rhythms, LFO modulation, and some envelopes. One subharmonic voice is created by a SEQ-3 clocked at audio rates by the VCO-1. I use recursive filtering to establish additional high frequency pitches from the natural harmonic series created by A2 and A4.

There are a total of 6 or 7 voices, depending on how you count. Every voice incorporates at least one Nitrous, Wolv, or both.

The only voice not derived from the VCO-1 is a Karplus Strong bass guitar voice (tuned to A of course), that uses VCV NOIS for excitation.

Much of this patch is derived from concepts I have been exploring since I first started my modular journey with VCV Rack 7 months ago. Part of the fun/challenge was figuring out how to employ various techniques I had already used, but this time using only the VCV, Vult, and Geodesics plugins.

If you download the patch, use the top button in the PULSES module to start and stop the patch. Press the bottom PULSES button twice while the patch is stopped to reset the patch to the initial state.

Below is a detailed walkthrough of the various sections of the patch: 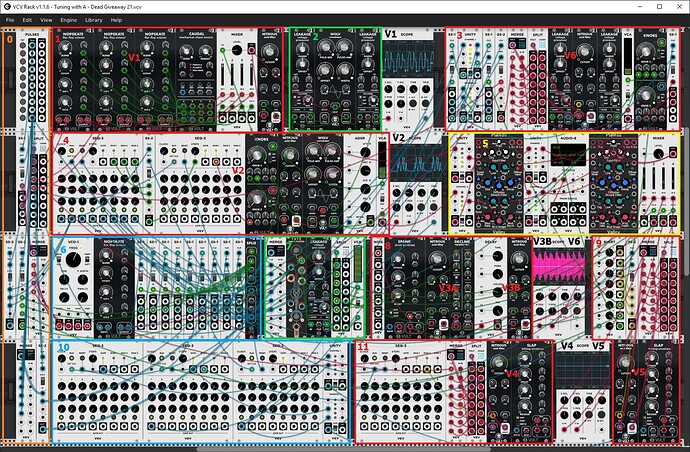 The patch image is broken out into numbered sections going from left to right, top to bottom. The red outlined sections are voices and have additional labels V1 – V6. The scopes are labeled in black to indicate which voice(s) they are animating.

Row 1, Red Box 3 – Voice V6: An eerie shimmering glissando produced by a recursive NITROUS resonant filter sweep. Though a simple concept, this voice has the most moving parts.

Spooky, atmospheric, beautiful, calming - I will be studying this to work out what’s going on and there’s a lot going on. Just going to leave it playing for a while…

Thanks! Glad you like it. I have already chilled to the patch for hours - it was a great background atmosphere while I was working at my day job (software development)

I first saw the recursive filtering technique I used in voices 4, 5, 6 in a video by Jacub Ciupinski, though he did not use that term. 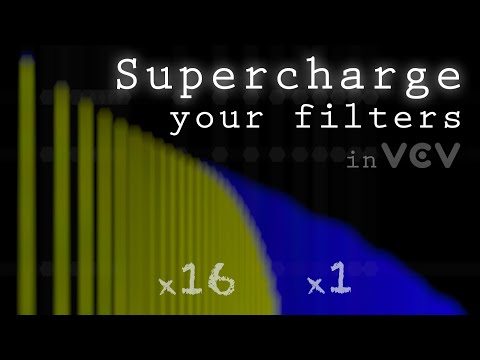 I took my Day of the Dead Give Away 2021 entry “Tuning with A”, and paired it with improvisation on various flutes for my most recent Virtual Open Mic performance on November 11, 2021. 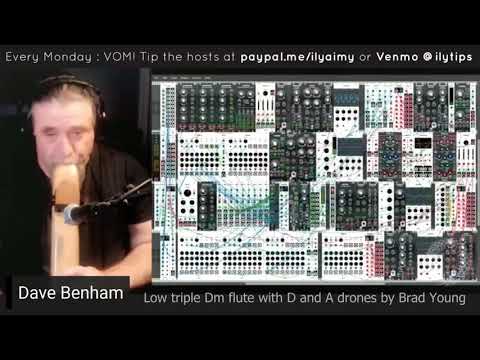 Nothing like a “Desolate Drone” to finish out the year. The video is from the last Virtual Open Mic of 2021.

I pair the VCV drone with Native American style flute improvisations in the accompanying video.... 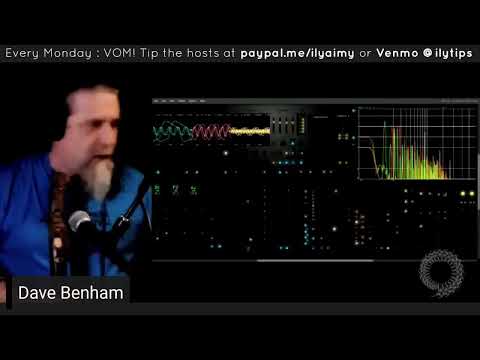 Last Monday I performed two new pieces during the weekly VOM, both featuring Native American flute and VCV with some Fundamental Constructs. The patches use only VCV modules (except for some VST reverb from Valhalla Supermassive)

Ambiguous Ambience - Slow autogenerative piano like “melody” that randomly switches between D major and D minor pentatonic scales - keeps me on my toes! The patch and notes are at VCV Fundamental Constructs - #36 by DaveVenom

I am really disappointed I forgot to direct this patch’s audio to my DAW, so I had to use the ZOOM broadcast audio for the video, causing the audio to suffer a bit. 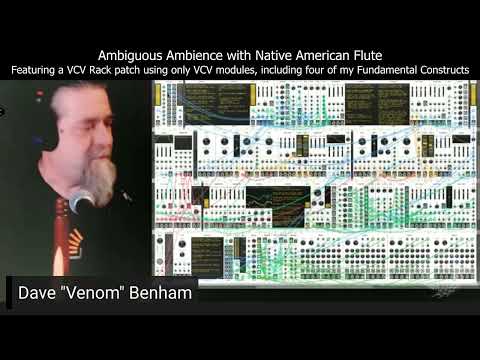 The Ganymede Children’s Hour - I find this one simultaneously eerie/unearthly, yet playful in a peaceful way. EDIT - Strike that. This is down right creepy. I envision alien children laughing and skipping, just before they jump on our backs to sip out our brains through our ears.

One voice uses hybrid AM and Ring Modulation with sine waves for both the carrier and modulator. The sine waves are generated by VCFs, and rather than use a VCA, I control volume via the carrier wave Resonance CV, which causes pitch drift that contributes to the eeriness of the piece. 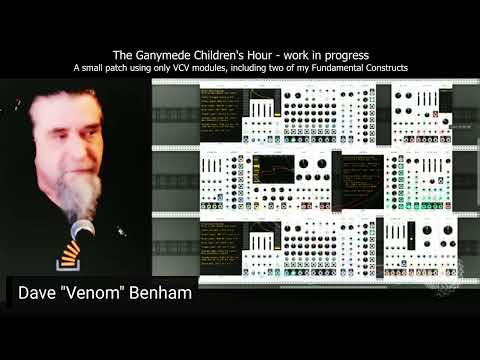 Here is the final evolution of “The Ganymede Children’s Hour” into something much bigger and quite different. I think it is darker, but not so creepy.

This uses even more of my Fundamental Constructs. The opening flute is a contrabass overtone flute I constructed out of 2" PVC. There are no finger holes. Different harmonics are achieved by blowing harder and/or covering the end of the flute. When open it can produce both odd and even harmonics. When closed only the odd harmonics. The fundamental pitch is a C2 - the lowest note on a cello. 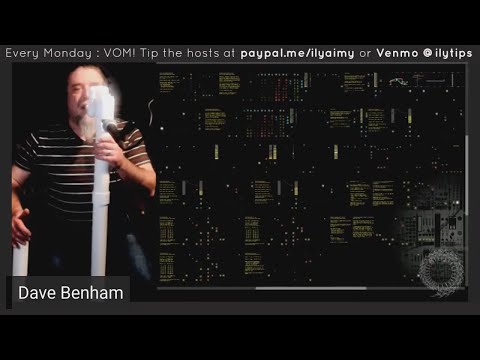 Here is a pure VCV patch (except for Valley Plateau reverb) that is chock full of complex meters and poly-meters. It features a 32 Sequencer I constructed as part of my VCV Fundamental Constructs project.

This patch is built entirely with VCV modules, and features the 32 Step Sequencer I... 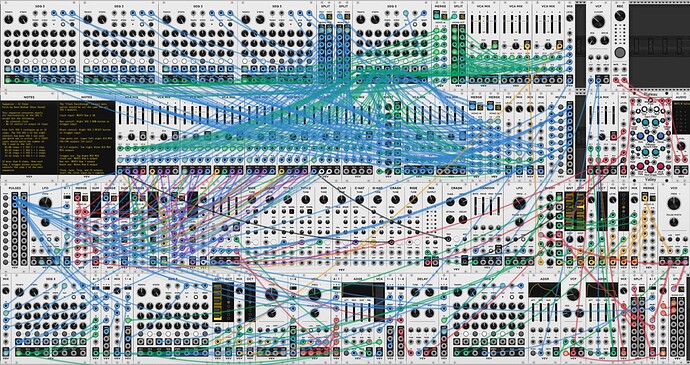 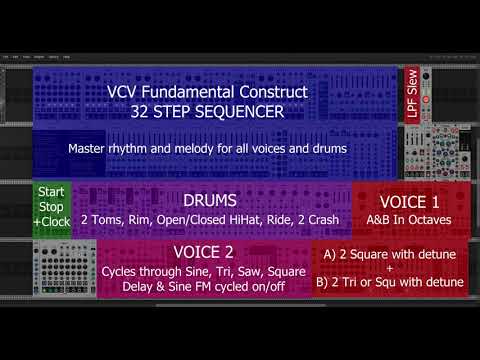 I finally got around to resurrecting my Subharmonicon emulator patch for Rack version 2. I’ve got some nice enhancements, like unison with optional detune, and improved FM. But I’m using some plugins that are not yet available in the library, and I’m not sure what changes (if any) will be needed when they finally get there. So for now here is a video of a performance with that patch paired with some Native American style flutes. I’ll post the patch when the plugins become available.

Cries From the Deep 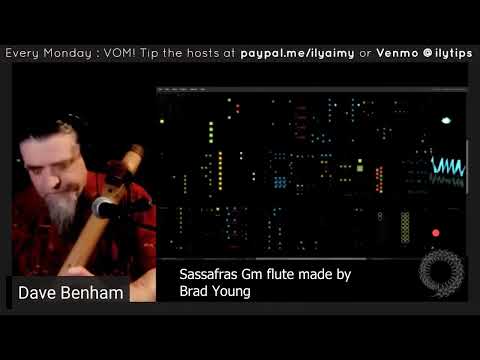 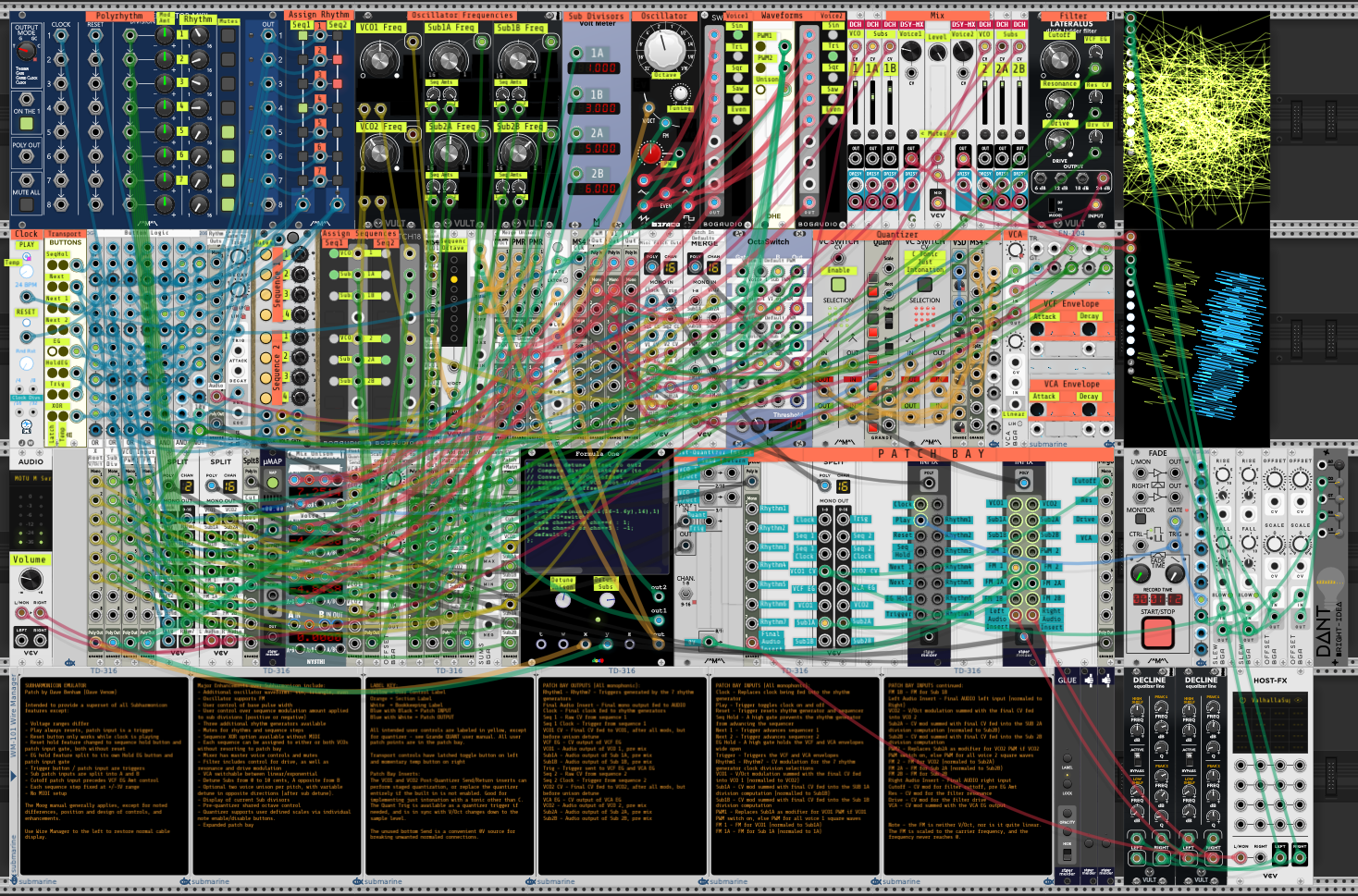 Cries From The Deep | Patchstorage

Cries From The Deep A flute improvisation backed by a VCV patch based on my...