Here is a live cover I did of “Georgetown”, by Rob Hinkal of the band ilyAIMY. Rob has been hosting the Virtual Open Mic (VOM) every Monday night since the pandemic started - a vital sanity savor for an entire community of musicians that now spans the country. A group of us surprised Rob in honor of one year of VOMs by covering some of his many wonderful songs. This rendition is a reprise of my performance 5 weeks later, on my 1 year anniversary of participating in the VOM. 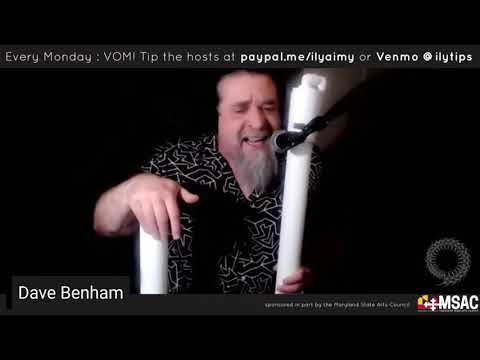 You can hear the original at Georgetown | ilyAIMY

I’m playing a large homemade overtone flute made of 2" PVC, and am backed by a very simple patch in VCV Rack consisting of a drone plus an 8 step sequence. 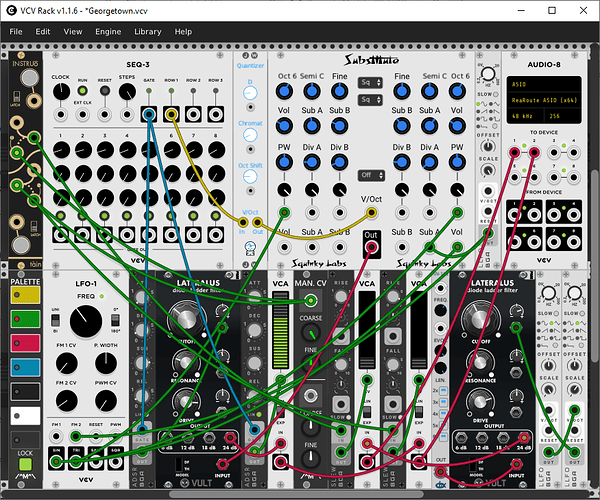 I’m particularly happy with how effective the drone is for such a simple construct. It is a Submarine SN-101 Smooth Noise Oscillator coupled with a Lateralus 24db low pass filter with the cutoff modulated by a pair of Bogaudio LFOs. The first LFO modulates the frequency of the second. Behind the scenes I have various reverb and delay effects running in Reaper for each of the song’s tracks.

That’s a beautiful piece Dave, with the flutes!

So here is another example using the Subharmonicon emulator. Not only does it use the exact same patch as the ambient piece in my first post, but it uses the exact same polymeter intervals, sub frequency intervals, sequencer settings, quantizer root note (D) and scale (minor pentatonic), FM and sync, and pseudo random parameter changes. The only thing that changed was bumping the clock from 25 BPM up to 100 BPM, shortening the EG attack and decay values, and changing the Valhalla Supermassive preset to “It’s Full of Stars”, which uses lots of widely spaced repeats. I changed the repeat delay to 1000ms instead of the default 1500. So now, instead of an ambient piece, it has a wonky, energetic rhythm which I have fun with while jamming with my Native American flute in Gm.

Rhythmic fun with VCV Rack and a Native American flute 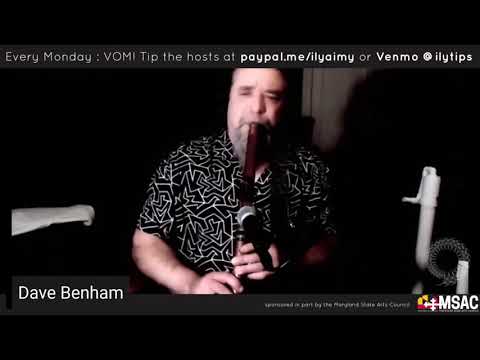 Another Subharmonicon Emulator example. This is actually the first setup that later spawned my previous emulator posts. This original patch has a cool bass line with a timbre that I really like. The night I created it I was having fun jamming along with my flutes, thinking it sounded really good. But days later when I was prepping for a live performance on the Virtual Open Mic (VOM), I couldn’t recapture the moment and moved on to the ambient piece instead.

So now I decided to script different scenes for the original patch and finally post a synth demo without flutes. 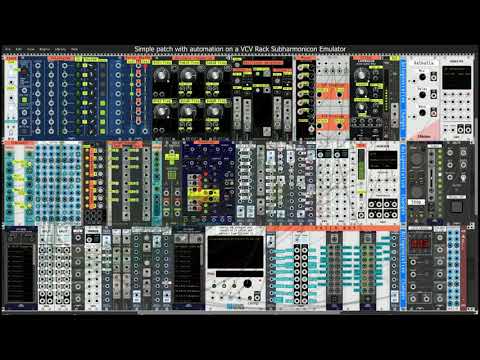 This patch uses the exact same rhythm settings, VCO and Sub frequency/division settings, sequencer settings, and patch bay patches as my prior two emulator posts. But now the tempo is 393 BPM instead of 25 or 100. Obviously the envelope generator settings needed to change, and the Valhalla Supermassive is now in VCV Host so I can easily modulate various delay/reverb parameters with CV. It should be possible to accomplish the same thing using free modules while keeping Supermassive in my DAW (Reaper), but this was easier.

The patch bay has the following patches:

The FM and Sync modulation can be switched on and off. When on it gives the bass line that I like so much.

Each scene specifies a particular combination of waveform and PWM selection, assignment of sequences to sub oscillator division selection, enable or disable the FM and hard sync, volume (distortion) levels, and delay/reverb parameters. 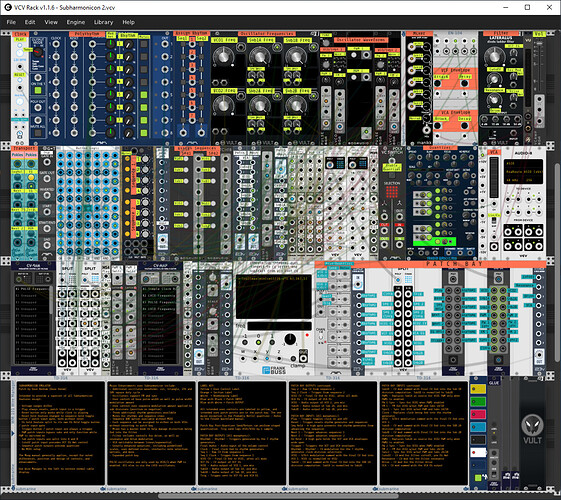 I was inspired by Omri Cohen's video "Let's build the MOOG Subharmonicon in VCV Rack"....

The main difference is I shrank the footprint a tad, and I added a post quantizer V/Oct send/return in the patch bay to allow for staged quantization. My intent is to let the “built in” quantizer set notes in equal temperament to whatever scale and key you want. Then a second quantizer hooked up through the patch bay converts the notes to just intonation based on the root note of the current chord, rather than the key of the scale. I hope to post a patch and video about this soon.

I also posted a composition patch using this version, and created a song with Native American style flute, using the patch as accompaniment.

Here is the patch I used to accompany a piece a performed on a Native... 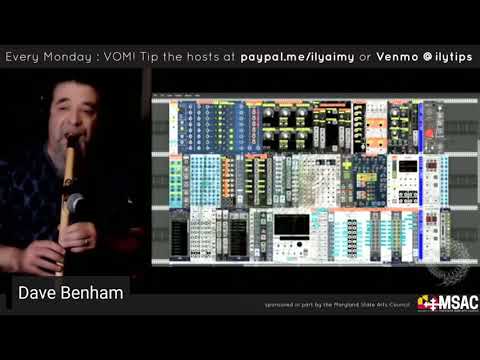 In unrelated news - I posted an entry for VCV-65 - my very first VCV Rack challenge entry. 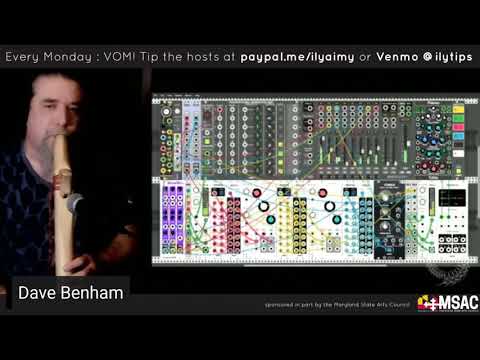 I’ve released a new VCV/Native American flute performance, this time using a patch that is derived from Dave Phillips’ “A Machine Dream” A Machine Dream Reprise | Patchstorage. I’m really happy with this one. My wife and I have been listening to it every night when we go to bed for the past few weeks. 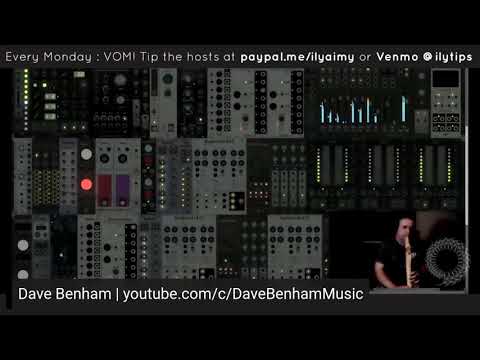 Thanks for making this available, Dave. I was lucky enough to catch this performance “live” & enjoyed it as much re-listening just now as I did then.

My wife and I have been listening to it every night when we go to bed for the past few weeks.

I would love an album of music like this for exactly this purpose. Seriously soothing sounds,

Thanks - glad you enjoy it. I’ve been talking/thinking about producing an album for years. Over the past year+ I finally got the equipment needed to do it, and now I’ve got more than enough material to produce something. It’s time to shit or get off the pot! (Trying to psych myself up to actually do something about it)

Do it, Dave! You’ve sold (at least) one copy already.

lots of good stuff in this thread. I don’t know if you are still interesting in sub-harmonics after this time, but a) you could ask for a second v/oct input on Substitute if you want. and b) a lot of sub-octave dividers (actually all of them?) have a lot of digital grunge down there. Often it doesn’t matter much if you use them for bass notes, but they can sound pretty bad if you play them up high. It took me forever to get Substitute to not do that. Anyway - enough about me. Good music in here.

Thanks. My VCV journey has just begun. I hadn’t been able to do much for ~3 months due to a crazy project at work. But that is finally over and I’m getting back at it.

I’m definitely still interested in the subharmonics, but I’m pretty happy with my emulator. I too was worried about aliasing. Also the wave sub-dividers all yield square waves, and I wanted other waveforms supported, as in the original. So I compute the required offset CV and sum with the master CV and feed that into the V/Oct input of actual subharmonic VCOs. I don’t do any waveform frequency division in my emulator.

After working with my own Subharmonicon emulator, I finally broke down and purchased Slime Child’s Substation. There are some aspects of my emulator that I miss (especially the sine wave option for the subs, as well as FM and Sync modulation). But I do like the Substation sequencer, the Saturating Mixer, and the LP4 Filter. I also like how the Quantizer adapts the just intonation based on the root note.

Here is my first patch - an epic 9 1/2 minute automated jam that I intended to use as a backing track for Native American flute improvisation. I haven’t succeeded with the flute yet, the chord modulations are difficult to keep track of. But I think it stands up well on its own. 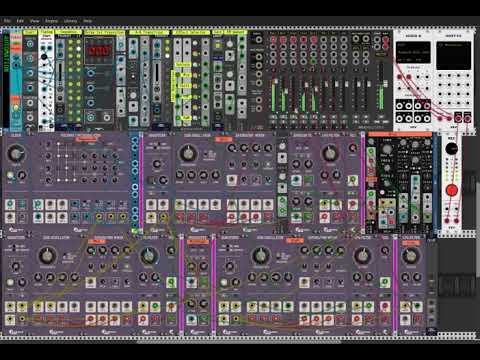 Hey Dave, I reposted your video in KVR’s music cafe, got some very nice replies. You can check 'em out at A Machine Dream (Reprise) - Music Cafe Forum - KVR Audio.

Wow, Very cool. Thanks for reposting and sending the lovely feedback.

I made a few tweaks to Dave Phillips’ original patch “Woven” and performed it live with my Native American flutes and voice. I called my performance “Woven Air” 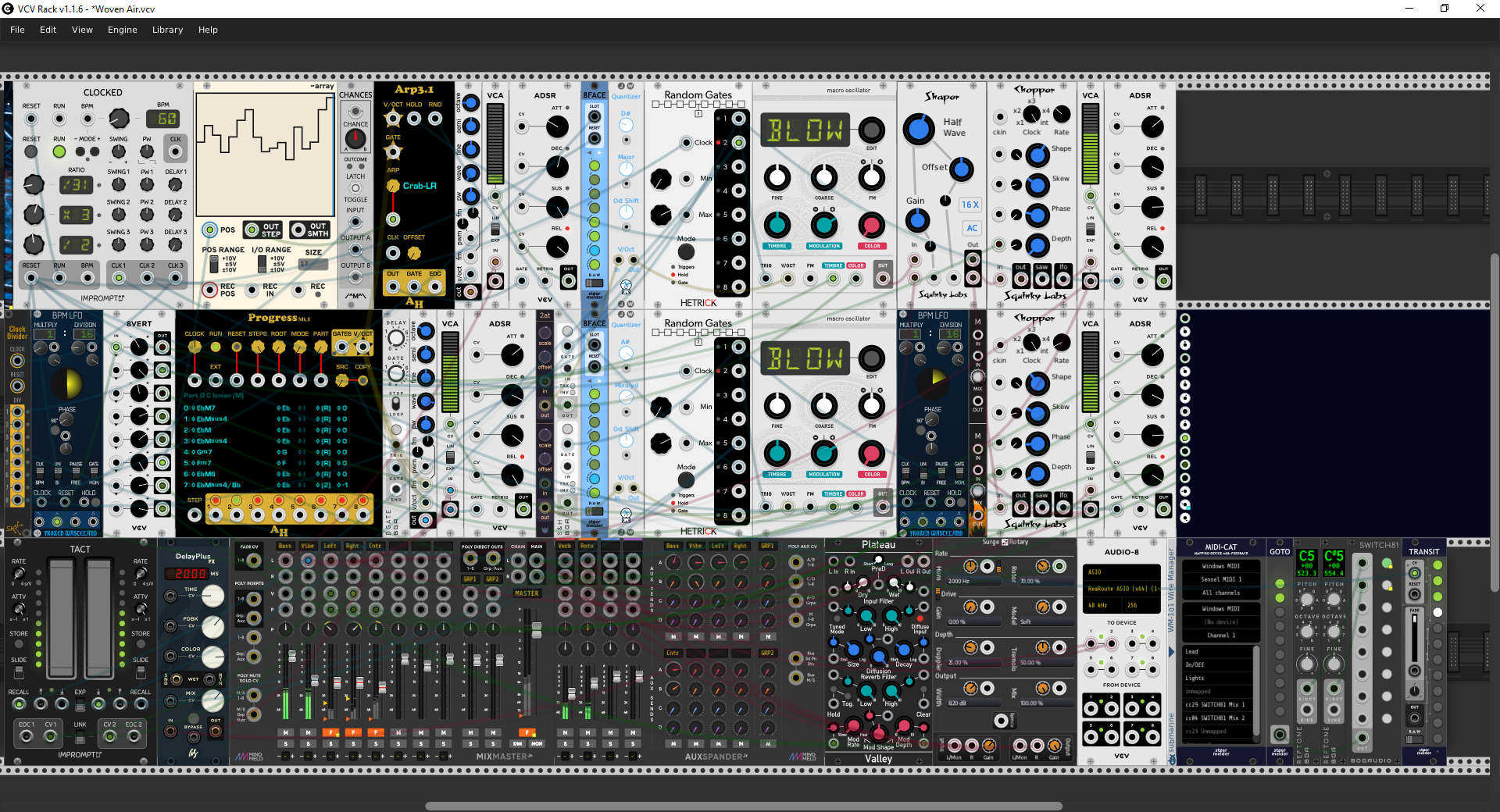 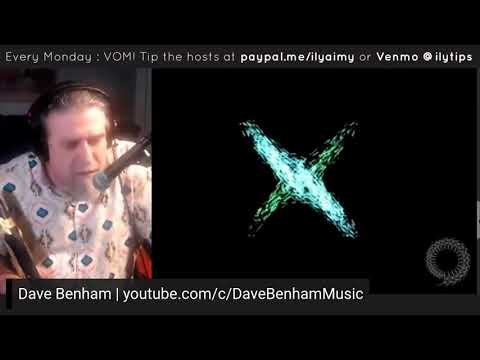 Here is a small patch that drives the SubStation Polyrhythm Sequencer at audio rates. So the sequencer plays the role of the sub-oscillator, with 3 subs, and the root VCO (the clock) is never heard directly. Full patch notes on PatchStorage.

The demo video is from a live Virtual Open Mic (VOM) performance where I add Native American flute improvisations. I think it is cool how the Valhalla SuperMassive delay/reverb instantly turns a distinctly rhythmic patch into a lush pad at the end - where I finish off with a full throated vocal improv.

Here is a small patch that drives the Slime Child Polyrhythm Sequencer at audio rates... 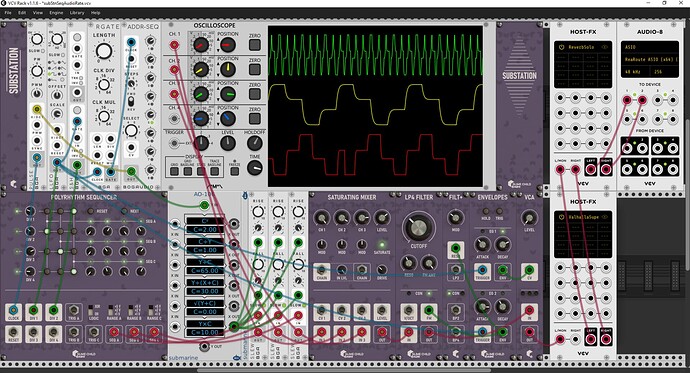 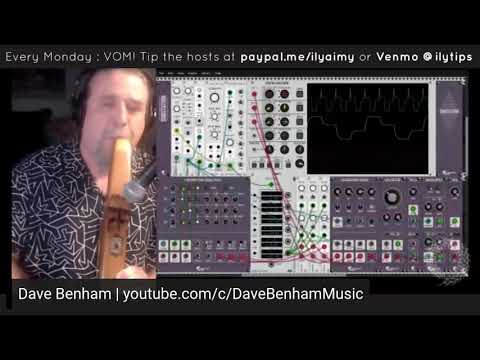 Wow. This is really great. I’ve been struggling to build a Subharmonicon Emulater for the past couple of days, but after seeing yours, I’m going to give up now. Still a great learning experience though. I also originally wanted to use Squinky labs Substitute, but was disappointed that you cant control each voice separately. And you cant use Sub1 to PWM the VCO like in the Subharmonicon. The nice thing about it though, is that the sub frequencies are in phase with the VCO. So I went the same route as you, and divided the Hz to get the voltage needed for the sub oscillators, but hit a brick wall when I needed to round the Volts to the nearest integer, to get exact divisions. Anyway, Well done. I’m definitely going to enjoy playing with this.