I was recently asked about the Binary Sequencer and what it does so here’s a quick run down.

The Binary Sequencer generates repeating CV patterns based on a binary counter. 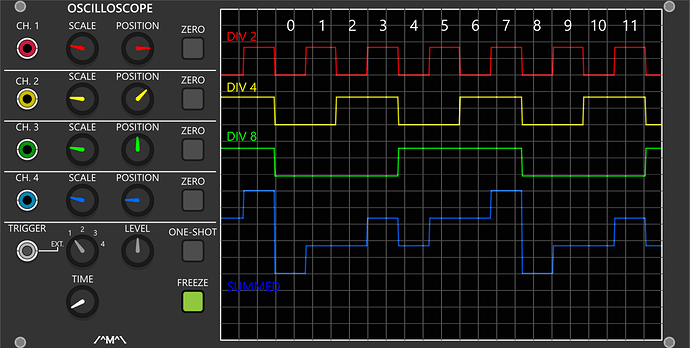 The knobs are configured such that they sum to the selected scale (10V, 5V or 2V) when they are all active (counter = 111111) and at their maximum positions. So for the 10 volt scale, the maximum voltage for each knob is around 1.67V.

The knobs are bipolar so the voltage for each bit can added to or subtracted from the summed output.

When connected, the S&H input overrides the scaling section and the knobs simply become voltage dividers for the voltage that is present at the rising edge of the clock. Each knob carries the maximum value of 1/6th of the S&H voltage. For example, 6 Volts at the S&H input will mean each knob represents 1 volt when fully clockwise. This can be used to add extra variation to the binary patterns.

For those that aren’t aware, some of the sequencer expander modules are also compatible with the Binary Sequencer:

I hope this helps everyone understand this module a bit better.

Um, you have an oscilloscope module??

(checks through my collection and finds none).

Thank you for the welcome Chris.

Yes, I do have an oscilloscope module but it’s part of my private collection at the moment as it is no where release-worthy. It does tghe very basic things I need it to do but nothing more. It will make it out into the wild at some point but not until it is fully functional.

It will make it out into the wild at some point

Hey ! Welcom on the forum

and Thanks for the amazing modules

Oh yes. I forgot my thanks too - very rude of me.

Thank you very much for your dedication and amazing modules! I really enjoyed generating melodies with the sequencer when you’ve released it some time ago and now I’m wondering what it will do with GX-RM, gotta try it out! Thanks again!

Here’s a video showing the Binary Sequencer and all of the expanders in action: 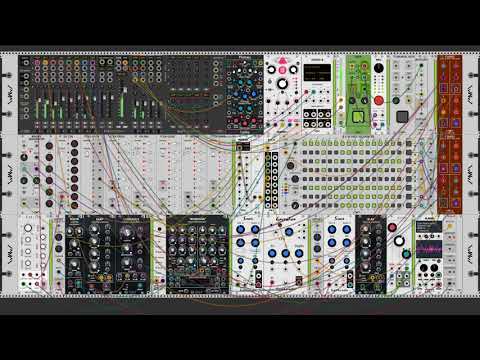 Hm. Sounds a little like ‘The Cure’…love it! (hm, no goth emoji

Thanks! I like the early Cure sound, lots of modulation effects with swathes of reverb.

Nice piece, that voice reminds me of Anne Clark…

Thanks for your great modules, one of the VCV´s best collections

The sampled voice is actually from an online text to speech utility.