Hi everyone Now, according to the title of the post, I offer something exceptional, but...

I gave myself another task that interests me …

… can this be achieved in way to maintain the ratios when accelerating CLOCK? 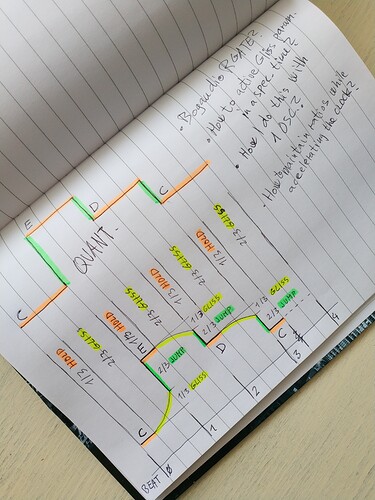 apropos, for me (and for other beginners), pictorial explanations are more helpful …

not sure about what you are asking, but to start, might want to flip that picture around

hmmm … but as I think about it, I probably want to achieve the impossible, it would be time travel … it is probably impossible to lift a ton in advance to the next tone that is in the rhythm of the beats … so I’m probably really asking something that is incomprehensible

Yes, but is there a rule when to trigger the pitch for the next note? Why not define the pitch in advance? I have something in my head with subdivisions, comparators, diff, timed AD, shift registers…

… this is exactly the effect I want to achieve, but for static tones to be placed on beats … now the gliss parts are on the beats

Does your initial sequence need to be random generated (ie noise through a quantiser) to achieve your aim or could it be programmed?

… but what I wanted to achieve (gliss before the next static tone sounds), I have already solved

… so I have already made time travel

if I could more accurately read your post (my English is very bad, and I still write through translator), then maybe I’ll solve this problem a little sooner

… but I still needed something like ML Quantizer in Last mode so that the next tones (triggered before, as you write) will continue through the next beat. … but ML Quantum didn’t always work right here because I think, if he gets the same tones in a row then his mod shifts too … so I made my own Last mode using Bogaudio RGate, and I solved the random CV only by catching tones with SnH from the division point in RGate. … the first static tone is made only by a quick cut of the rise and fall modulation in the slew module for each beat. Thus, Slew is controlled only by the hard Gate of the second part of the RGate division. … so you were closest to how I solved it , but it can be done differently, but maybe it would be more complicated