If Clocked included a “Gates closed on Stop” mode and a “Reset on Run” option, in addition to the current settings, it would be the be-all-end-all clock for me. You could then cover all the common use-cases, and if you were running two sequencers that counted beats after a reset differently, you could just run two instances of Clocked with different settings, but otherwise in sync to cover both types of sequencer.

If Clocked included a “Gates closed on Stop” mode and a “Reset on Run” option, in addition to the current settings, it would be the be-all-end-all clock for me.

Doesn’t it have both of those ni the right click menu?

“Outputs reset high when not running” is one option. If you load up Clocked with default settings, then uncheck that box in the menu and toggle Run to off, any open gates will remain open. So I’m not sure if it’s a bug (technically, there’s been no reset if you just turn Run off), but it’s definitely not working as desired because gates will stay open when not running.

Now, there is also a “Reset when run is turned off” option that, when enabled along with “Outputs reset high when not running,” will close the gates when Run is set to off. But in doing so, you’re sending the reset on stop. Not on start. No reset gets sent on run and this will cause some sequencers to go out of sync and start up on beat 2. Now, his sequencers have a “Reset on Run” option, but others may not and may operate differently. If the clock had a “Reset on Run” option, I’m thinking it would get things in sync.

Hence the dilemma. If the Outputs reset high thing is a bug and it’s not supposed to require a reset to close the gates, then it may be fine once fixed.

And please, if I’m wrong about any of this or just not getting something, feel free to correct me and tell me I’m an idiot. I’m still wet behind the ears when it comes to Eurorack so I could just be missing something obvious.

there has been a very long debate on several points in the past, from which were about start on first step, last step, and reset sequencers or keep the step where it is. If i remember well some of those discussions have lead to the option “outputs reset high when not running” In Impromptu Modular Clocked (@marc_boule).

Personally i don’t like this option, and rather not use it, cause it can sometimes in a large patch send the active step when stopped to many places where it is not desired, FX, and other things ( switches etc) that should be closed when stopped.

So i rather don’t use that option, the problem here is that many sequencers and now also utilities have become dependent on this “feature” for example i recently posted an issue about 8Face not starting correctly, turns out it relies on “output reset high when not running”.

I also noticed when using this option, in a patch where i was using swing, everything went totally weirdo, and when i turned that option off, everything played perfectly fine with swing.

So now the dilemma for me as well is that some cool modules rely on this high state, while i rather not use it.

I’ve found another weird behavior with ZZC Clock and Divider, assuming I have connected them together correctly: Clock Phase Out to Divider Phase In.

If you adjust the top two knobs on Divider to make different time divisions, and then return to 1:1, the Gate Out gets out of phase with the Saw Phase coming in. This is a problem if If you’ve managed to clock a plugin with Clock’s Trigger Out and hoped to keep it in time with the Gate out from Divider.

You can see this behavior with Scope. Plug Clock’s Phase out into X and Divider’s Gate Out into Y. Adjust Divider’s time divisions. Bring it back to 1:1. Now out of phase.

Clocking is surprisingly not a simple issue, and for those that are curious to know more about the clock outputs being high when not running in Clocked, you can see the history and motivations for this here:

I’ve been thinking a bit about clock reset issues lately, and a post by @Soothsayer in this same category has prompted my current post. My post here pertains in particular to how clocks interact with sequencers and sequential switches, and I am starting to think a small change might be needed. I’ll first summarize the next change coming to Clocked in my upcoming update 0.6.13, for those that are not aware yet, and then I will propose my idea. New in upcoming Impromptu 0.6.13: As a result of di…

Here is the TLDR:

“My thinking is that Clocked should actually set all its outputs high when we do a reset, even if it is not running. It would thus be ready in that state (called “armed”, lets say, just for purposes of discussion), such that when we turn on run, the clocks are already high and would not immediately trigger sequencers and sequential switches, thereby properly playing the first step.”

I’ve been playing with your Clocked module. Very full featured and easy to understand!

EDIT: I see the contextual menu items, now. However, the above still seems to be true even if “Outputs reset high when not running.” At least at very low BPMs.

Yes, pausing the clock outputs when run is turned off was intentional, so that when we are playing many sequencers at different clock rates, say with many patterns, the whole patch can be stopped (paused really) and then it will continue playing right where it left off, without any sequencers getting misaligned nor missing any beats. (https://github.com/MarcBoule/ImpromptuModular/issues/25)

With the “reset when run is turned off” option, I believed it would cover those cases where users instead want it to restart, but it seems there is a need to have Clocked restart its clocking engine internally while not simultaneously emitting a reset pulse on its reset output jack. So there’s still some work for me to do it seems

Issue: Clocked: close all gates when Run is turned off.

Yeah, it seems like there are at least two common use cases from an end-user perspective:

Which then gets further complicated by the fact that…

The only thing we can agree on is everything should stay in sync, but doing that is much easier said than done. And I’m just talking from an end-user perspective, not even getting into a developer mindset.

I’m brainstorming here, but I almost feel like CD players had it right with their combined play/pause, and standalone stop buttons. I’m almost thinking, user hits pause [in this case turns off run] on the clock and gates stay open, sequence doesn’t advance, next beat picks up exactly where it left off - no reset is ever transmitted. Next use-case, user hits [lets say a new] Stop on clock, any open gates close, but playback will pick up back up at beat 1 (with a reset probably happening on play, so: reset, two, three, four). So could a new stop button, with a “Send Reset on Play” option do the trick?

In the end, I kind of feel like different instances of Clocked, daisy chained together, but with different reset behaviors enabled in the menu may be required. Maybe one instance resets on stop, another resets on start, and another resets high with a reset on stop. We can already daisy chain Clocked, so maybe that’s just a way to get there. Then again, the How To Rack book goes into a workaround with Clocked that seems to keeps things in sync (page 55) - so maybe a cleaner solution is possible: http://www.musicwords.net/vcv/How_to_Rack.pdf

Who knew clocks could be so complicated? Obviously Marc has, but I certainly never gave it any thought before recently.

Testing this could be a lot of fun though. Take Clocked, a Phrase-Seq-16, an instance of Topograph, maybe a DK Trig sequencer, throw a Hora drum seq in for fun, Chronoblob, a BPM LFO, and try running everything on the same clock and try to keep everything in sync on beat 1.

Interesting analogy about CD players. In that case, everyone agreed on a standard, which I guess is not the case, so far, for module makers. Which puts kind of an undue burden on the clock makers to kluge something for every possible scenario.

Great discussion guys, I will give this more thought and see what solution works out best given the current state of the module. 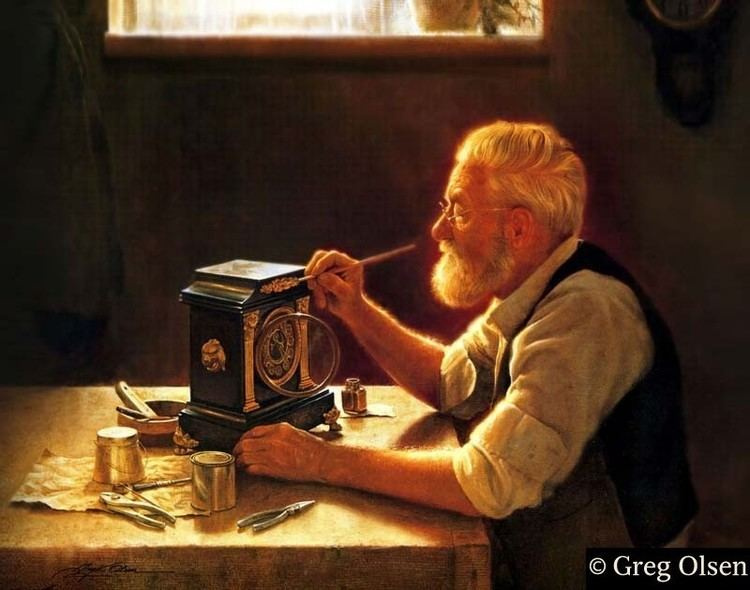 If it ultimately ends up making more sense, because you don’t want to risk breaking compatibility, you could always consider making a new module called reClocked (Clocked Pro, Clocked Xtreme, ReClockeDux - ok, not good at naming things) with an expanded feature set (stop button, reset on start option, maybe a trigger mode, or different behaviors per output). Heck, I’d be in for a paid module that did all that!

Ok, perhaps we are deviating from Jon’s post, but feel free to continue the chat in the github issue. Here’s what I propose. It’s a small change, but it should offer more flexibility: 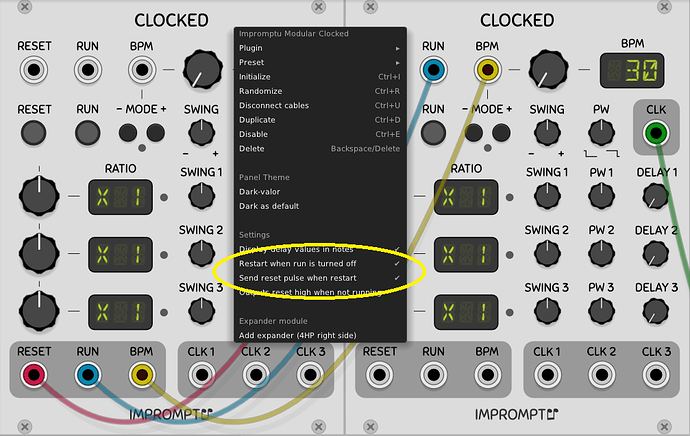 Issue: Clocked: close all gates when Run is turned off.

Interesting, I guess if the sequencers follow the standard to ignore clocks within one millisecond of reset, there should be no problems, but if not, I believe that it may depend on the routing through modules if ever Clocked is not conected directly to the sequencers. But if this setup is working for you, all the better!

Your clock seems the best of the batch to me. I just wish it was a little skinnier.

I am trying to make a fairly functional, semi-permanent rack that fits all in one screen at 100% zoom. That basically means two lousy rows.

Nothing else lets you set the pulse width, add delays, and includes that many multiplier options in it. It’s worth the size IMO.

I have had requests to make a Clocked Jr, with a few more options and more compact layout, and it’s in my scrapbook of projects to do, but there are just so many modules to make, that I don’t ever seem to get to it! It’s there though, one day

@InductiveOne I have implemented your routing internally in a new version that is up in my github releases, if you would like to try it out. Thanks to @funkybot also for the comments also over in my github issue about this, I think that with these latest menu options, we can cater to many needs: 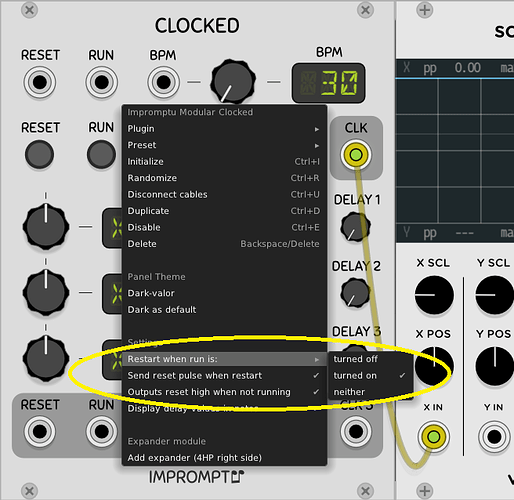 Marc, looks great! Will check it out later today.