I hadn’t considered that. My initial impetus was just for a recorder since there wasn’t anything in the library to solve that problem. There are a number of MIDI players in the library, so not sure building one would add much (but it would be a natural pairing with the recorder). Curious if you have any specific ideas on what could make such a MIDI player compelling.

I was thinking about the 14bit midi recording - don’t think any players exist in Rack for that.

If the problem is in my BPM → MIDI tick math, it’s this code - can anyone spot the problem?

where “tick” is the event timestamp used on the actual MIDI data. The file is created with 960 ticks/beat and BPM is coming directly from Clocked’s BPM CV - and which matches its displayed tempo exactly (no rounding effects on that value). In my test, it starts to drift quite quickly (with a 240BPM test recording, it’s already playing early notes in the second measure…

I have had similar issues in the past, especially when working with smaller numbers where results got zero instead of a small number. So you haven’t shown the types of the varaiables but I would look in that direction.

I don’t think I’m underflowing a variable - but just for completeness, here are the types of all the variables involved in that expression:

I am not saying it is the case, but I remember for that perticular case I went to doubles. But you should easily see with the debugger what is going on and if the numbers are corrrect.

Thanks @robert.kock - I’ll put that on my list of things to look at.

@robert.kock nailed it. It really was just a matter of changing float math to double math.

While I was in there, I added support for tracking tempo changes during the recording.

@aetrion-music - please give it another try. You should see rock solid timing now. Version 2.0.0b5.

Nice! Will check tomorrow and report back.

Awesome, great news re expander. Thanks for considering.

Checked again with the same patch I used before. Timing is rock solid down to the tick when importing in DAW (Logic).

Thanks all! I’ll get this submitted to the library forthwith.

@Chinenual If you are open to a bit more feedback regarding the module design.

Not as a must, but as a potential future update, I would say the panel could be a bit more “explanatory” and easier to navigate on the eye given the amount of inputs in the grid.

This is also something like Vortico does with the fundamental modules like split (also a cool inspiration for a more ‘fancy’ LED Display). 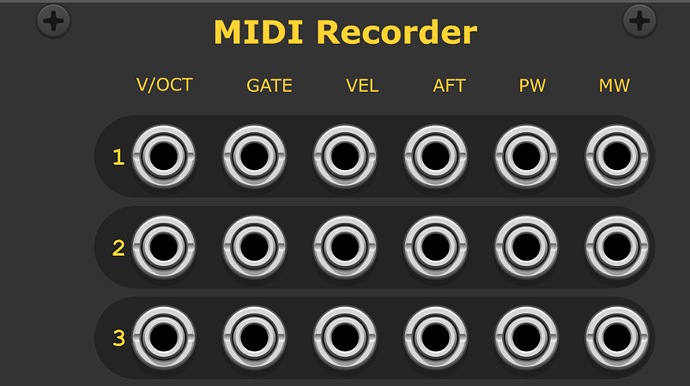 Thanks for the feedback! Good ideas and I’ll see about incorporating some of that in the next release.

I’ll also experiment with brightening up the yellow color (at least when used as labels) to improve contrast.

The original release has not yet been added to the Library but I’ve been working in the background on the CC Expander that @Jens.Peter.Nielsen suggested. It also has some UI improvements similar to those suggested by @aetrion-music . It’s ready for testing! (Release Release v2.1.0b1 · chinenual/Chinenual-VCV · GitHub) 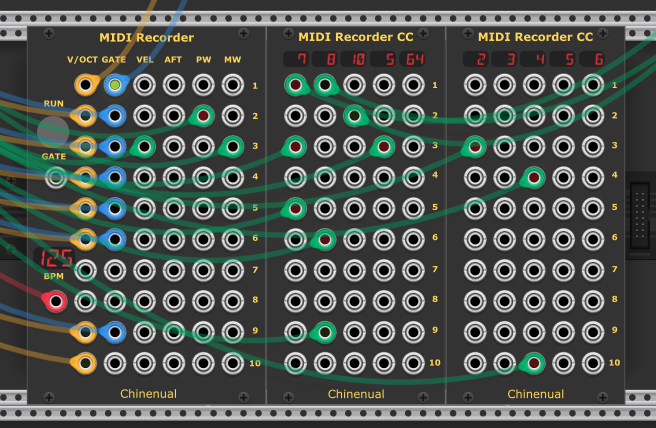 The updated documentation is on the “develop” branch at: Chinenual-VCV/README.md at develop · chinenual/Chinenual-VCV · GitHub

Yeah, some ppl use tinny fonts and it makes the panels pretty hard to read. Wen I made modules I always used 14 point text for labels, using the Robato regular font.

Amazing, thanks for adding the cc recorder expander.

How do you allocate memory while recording? Or do you pre allocate first?

MIDI events are allocated as they are recorded. Memory is freed once the resulting file is persisted (after the recording is stopped). Or at least that was the intention - I believe I may have spotted a bug - the memory is freed on module onReset() and when the next recording starts. I’ll fix to also free immediately after persisting the MID file.