Caution (and Save As) advised when opening V1 patches in V2

Edit: it looks as though at least some, maybe most users are getting a “could not find module” popup in V2 when loading a V1 patch with missing modules; I (using V2.0.0 Pro on Win10) am not, for some reason. If anyone else is or isn’t seeing the pop-up @zwayne linked below, could you comment downthread? The overwriting issue is obviously less serious if the popup is working.

) that not every V1 module is available in V2 yet. A ton have been done already, thanks to a huge group effort; many more will be up there any day now; and a few may never make it over. There’s no other way that a big version change like this could have gone.

V2 [at least for me–see note above] doesn’t warn about missing modules when it loads V1 patches; it just leaves the modules out. That’s probably fine, although it might be causing some of the confusion. The potentially more serious issue is that, as far as I can tell, V2 doesn’t keep your V1 files if you open them and save over the original. Any missing modules and their connections will be gone for good (unless you can find a V1 autosave in your user directory, or you kept a backup [obviously a good idea]).

This isn’t a huge deal, and as more V1 modules make it over to V2 (especially some of the bigger ones), this will become less and less of one. But it seems as though at least a few users have been bitten by this, so I thought it would be a good idea to put a warning up.

Based on a discussion with @phaelam and @steve elsewhere, I’m going to make a feature request with VCV Support that the next release of V2 adds something like converted_from_V1 to the file name when it opens V1 files. Unless and until that happens, I’d suggest that the first thing anybody do when they open a V1 patch in V2 is Save As with a new file name.

Can you clarify what the issue is? If I open a V1 patch in V2 with missing V2 modules it certainly does warn about “not found modules” first. Same behavior as V1.

As far as overwriting V1 files, makes more sense to me to have a new file extension - e.g. .vcv2 - since the file formats are different. V1 is plain text json and you can modify it with a text editor if so inclined unlike the V2 file.

If I open a V1 patch in V2 with missing V2 modules it certainly does warn about “not found modules” first.

Interesting; on my system [Rack Pro 2.0.0, Win10], if I save a V1 patch with a module that’s not in the V2 library, it doesn’t raise a prompt when I open it in V2. (And I just checked–it actually doesn’t raise a prompt if I save a patch in V2, move a plugin it needs out of /plugins, and re-open it). So maybe there’s an actual bug here in addition to the surprising overwrite behaviour.

@zwayne, what system are you on, and do you mind screenshotting the dialog box you see and either reposting or PMing it to me? And can anyone repro this?

I didn’t bring up the json vs Zstardard tarball point in my OP because I didn’t want to complicate the issue, but it actually makes it worse, since not only will a user who saves over a V1 patch lose the modules, they won’t be able to open it again in V1.

makes more sense to me to have a new file extension

I hear you; picking a new extension and substituting it on load would have avoided the problem but I can’t imagine Andrew wanting to change that now that V2 has been officially released (and I can see why). Much easier to just alter the filename so that no one accidentally overwrites; nothing else needs to change anywhere in that case.

Just to be clear, you don’t see a warning message upon first trying to open the V1 patch in V2? Nothing like this (same as the V1 warning)? 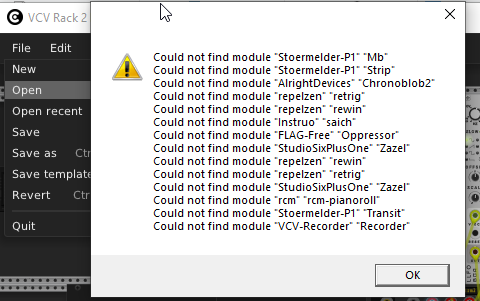 I do not, which was surprising, as I’m used to it from V1. My assumption was that V2 wasn’t firing that dialog on modules versioned 1.x.y for some reason, but having tried it exclusively on the V2 side I also don’t see it if I make a patched-in V2 module missing by manually moving the plugin DLL out of the way.

So now it’s a bug report. I’ll try to repro it tomorrow on some other computers; maybe there’s a weird circumstance on the one I was testing on. If I have time I’ll build V2 Free from source, put in a hook, and see if I can isolate the problem.

Lots of people seem to be reporting modules missing in a way that makes me wonder whether they’re not seeing the dialog as well, but I’m not sure. I’ll start asking.

Even with the pop-up I think the filename change (or equivalent) would be a good idea, since the overwriting behavior is a little surprising, but if most people/everyone but me is getting the pop-up, that problem is much less serious than I first thought.

Thanks for the screenshot and followup!

I get warnings like that but I find I can adapt the v2.0 patch and all my resaves are in a separate folder for v2.0 so I still have all my v1.16 patches.

WOW, I just realized that V2 Free displays the not found modules message but V2 Pro does not! I’ll report the bug now…

oh, weird! Of all the things that I wouldn’t expect to make a difference… Thanks very much for the followup!

I was thinking that it might also be whether the “Show tips at startup” box was selected or not (mine was), but haven’t had a moment to test that.

BTW, I got a nice message from Andrew via Support that he’s working on a way to mitigate the overwriting issue (sounded like it might be an extra precautionary dialog) but the missing modules-not-found message really is a freestanding bug, so thanks as well for reporting it.

Yes, at least regarding not displaying missing modules (not the overwriting issue) got an email a couple of days ago that “this bug has been fixed for the next release of VCV Rack Pro.”

Thanks for the info, that sounds good