CAO Plugs now has another module.

Originally, this had just the Dual CV Shift, but now there is a simple utility for adding a voltage to several others independently.

The use I had for AddAll was in trying to create a patch similar to the Lyle Mays Oberheim patch from “It’s for You” (AFWSFWF) and a few other Pat Metheny songs. There are several voices, and each oscillator is unison, but each is inflected at the start with envelope subtly different from the others, and so I wanted a simple way of imposing different envelopes on a single V/Oct.

As before, you may find the source at: GitHub - caoliver/CAOplugs

Please forgive the Lispish formula. I’m not sure how best to write math here.

I just added a simple asymmetric pitchbend scaler to CAO Plugs. Upper and lower bend from none up to two octaves measures in semitones, and these are floats, so intermediate values are allowed.

E.g. Setting a bend range of -12.1 to 2.1 makes the bend range slightly flat of an octave down and slightly sharp of a whole tone up. Be well!

I just added a simple chord latch to CAO Plugs. The basic idea is to hook your MIDI controller with a polyphonic MIDI-CV and a monophonic MIDI-CV. When the latch is open, gates and V/Octs are passed transparently. When the latch is closed, the active gates and the V/Octs are remembered. Then, when the mono controller provides an active gate, the remembered gates and notes (transposed based on the difference from the lowest note played at latch time) are sent to modules of your choosing. The mono V/Oct can be bent or slewed for extra fun(k). Latching may be done via an on-module button or sent over a patch cable. The idea here is that one might designate a latch button on the MIDI controller. Source code lives at the github link given at the top of the page.

I’ve been hacking up a simple quadrature sineosc for some freq shifter experiments I’m doing. It’s a dual, and there is an input for shifting the phase up to +/-180 degrees. If the frequencies on both are the same, the second will always return to the same phase relation to the first. Is this something someone’s likely to use? Should I finish up a panel design? Is it just something I alone need? 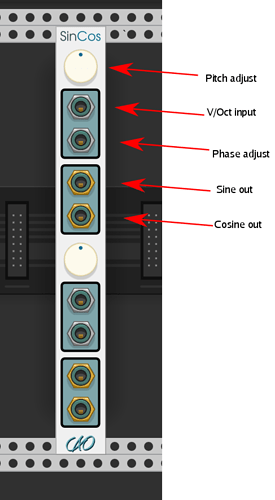 i’d definitely use that.

I’ve added the SinCos dual quadrature oscillator to my source repo. Here is an example to play with: weaver.vcv (16.6 KB) 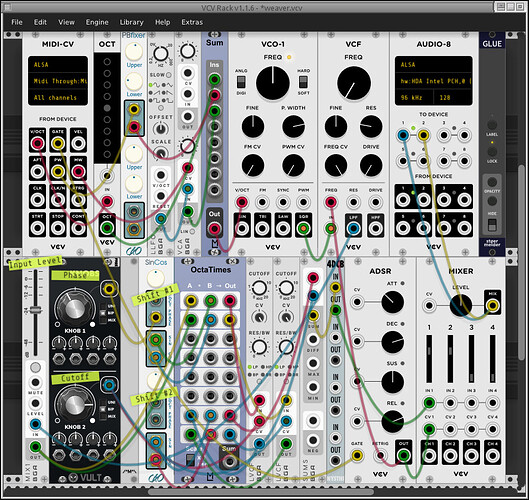 Hello Chris, Stupid question, do you have to build these yourself or is there VCV file amongst the files on your depository? They do look interesting little modules.

That’s not a stupid question at all. I’m not in the normal library, so you do need to build those or find someone who will help you.

BTW: I just made a new commit, as there was a reference to a missing module (requiring hackish changes to Rack) in the last commit, so the CAO plugs didn’t load. I cleaned that up and an unused variable warning.

Btw, sounds like a cool lfo. But is this weaver patch anything more than experiment to make a frequency shifter?

Thanks for the answer, no idea how you go about building them. Is it a complicated process?

You might find that so, but I like the sounds/distortions I get from it, so I’m keeping it around. It’s also the only patch I currently have using quadrature oscillators. BTW: sincos is audio rate. I suppose I could make a slow button, but as it stands the knob does +/-4.5 octaves centered at C below A440.

I don’t know the build process on Windows or Mac OS, but on Linux, it’s fairly straight forward.

I have no submodule references and deps outside of Rack, so there really is not much to do.

cool. tx for the reply.