Version 1.2.0 should now be in the library, go check it out!

Beautiful! Thanks so much!

nice work! I have a small question, and my intention is not to be negative. I notice that some modules have different styles of knobs (like the white ones in Morphader vs, Sampling Modulator).

Are the Befaco hardware modules like this, too, or are you evolving your knob style?

Also I notice (since I’m staring at the screen capture!) that Sampling Modulator is the only one that doesn’t use the white rounded rectangle as a backgroud for the output jacks.

I think it’s all very true to hardware… 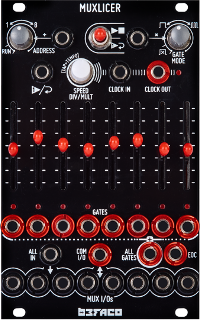 Nice! That does not surprise me.

I’ve noticed a bug, not sure of the proper way to file it. Is here OK?

It seems like clicking the red “play mode” switch at the top only brings it back to the middle (1) position. I can right-click and enter 0 or 2, but clicking it doesn’t behave the way it does on the similar range switches on Rampage, for example.

So this is intentional, in that it’s a momentary switch, i.e. the hardware always flips back to the middle state from top or bottom (it’s different to Rampage in this regard). It’s one of those things that are a little hard to express in software!

Oh! Which explains why you can flip it up or down by dragging it, but it goes back to the centre.

I feel I’ll be spending a lot of time with it.

Maybe it would be a good addition to also make the two symbols for the upper and lower position of the switch into buttons - or even split that whole area into two buttons. Then it would be a little more convenient to click on them or to map them to MIDI buttons instead of dragging the handle.

Interesting. The first idea might have some legs, I’ll look into it.

For the second idea, it’s technically possible, but looks pretty ugly and probably strays a bit far from the “artistic licence” in converting hardware to software: 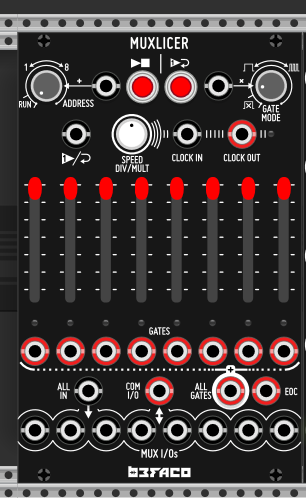 Yes, I think it should still look like the original, I thought more like an invisible overlay over the area, with the switch being animated when clicked above or below…

I think the coolest solution would be if the symbols were clickable and the switch moved accordingly to give visual feedback, but maybe difficult to realise. As an alternative it would also be cool if the symbols would light up when clicked, but again might be misleading about the hardware module.

Hi hemmer, I was bugging you on github earlier, and now I have another question related to Muxlicer. (or maybe someone else who has the hardware can answer!)

Is there no way to reset the internal clock with a pulse? I tried to use the “reset/one shot” input but it seems not to work instantaneously, but instead wait for the next internal clock pulse. It seems the emulation is very accurate, but can this really be how the hardware works?

If neither the clock input nor the reset/oneshot input is instantaneous, there is no reliable way to start the module in time with the outside world?

Since a picture is worth a thousand words, here is the vanilla sequencer resetting after 7 steps, where as the befaco plays all 8 and resets after the 8th step. 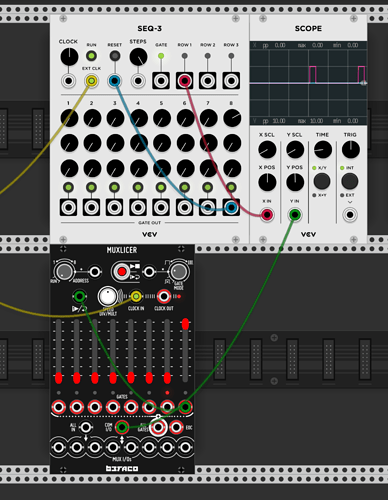 I tried to use the “reset/one shot” input but it seems not to work instantaneously, but instead wait for the next internal clock pulse

I’ll need to test more, but this at least is the same on the hardware - i.e. the reset input/button ‘queues up’ a reset for the next clock tick. This is indeed different behaviour to Seq-3. So in your picture, the gate on step 8 says “on next tick start at beginning”. In this scenario, if you want a 7 step sequence, you should use gate out on step 7.

I don’t know, but I think part of the reason that the hardware works this way is due to having clock mult. Clock div is easy (you just skip every Xth tick), but mult requires running averages of tick durations. It’s useful to hold a mental model Muxlicer is always continuously updating its clock using “clock in” as a tap tempo source - you can give it instructions (e.g. fire a one shot) that will kick off on the next tick.

Is there a specific use case you’re thinking of?

Thanks again for your help. I was pretty sure you had accurately simulated the behavior of the hardware, but I guess was just in denial about the design.

Unfortunately it is impossible to sync a muxlicer with a conventional sequencer so that both of their first steps start and play simultaneously, which seems like a basic necessity to me. However, i found that if you reset the other sequencer with the first gate of the muxlicer, they will line up when the muxlicer eventually starts so it’s not a complete loss.

Anyway thank you for the confirmation!

This was a bit of a monster update to get over the line, but very happy with the end result. The main update is Noise Plethora, but there are some bugfixes in there too.

In other “life” news, Very soon I’m about to become a father for the first time so will probably be a little bit less responsive for the next wee while (i’ll still be around now and then). I’m looking forward to soothing the baby to sleep with some freaky noise algorithms such as satanWorkout.

That’s amazing, thanks so much! And congrats! All sorts of noise can be great for helping babies sleep so Noise Plethora will come in handy for you

Congratulations Papi and Mami too, of course

Thank you and congratulations!

Congatulations to the impeding birth! May all go smooth and quickly!