Used Reaper for a little bit. I stopped using it because I had sync issues with the BSP, and pretty much just put it away. Until this weekend…

The fork: I’ve used Ardour and Mixbus a lot longer than Reaper. Used it in both Windows and Linux, but I’m using Windows now because of driver, and VST/plugin support. Instead of using my interfaces asio drivers, I’m using JACK(for windows), and it works flawlessly. Just make sure you register the file or whatever in Windows, or it won’t show up as a Sound Device. I’ve yet to have a huge crash which resulted in time or data loss.

In VCV Rack, I had issues with Core Audio plugin not showing 8x8, or 16x16 active ins/outs. Only four each. More is always better for me, it’s the way I use Rack. So I tried the 64x64 plugin and that only showed the same.

My last terminus was trying SkrylarJACK plugins, and it works well! I can say a lot better because the sound device is already predetermined. Though, the ins/outs are not. But instead of locking up when messing around with the Core Audio plugin and devices, SkrylarJACK plugin allows you to add more if needed. Just add another plugin beside the first, and it instantly shows up in JACK/Catia as per mentioned in Github.

I’ve used SkrylarJACK plugins for a couple days, knew about them since they came out. I’ve wanted to get this BSP working under Windows, in VCV Rack, and now that I gave up ReaRoute and Reaper, Harrison Mixbus it is, and my favourite out of the bunch I’ve tried.

Open up Core Audio, only use the inputs to connect to Clocked. In Jack, and the BSP itself route where your clock out goes to your cable input on the interface.

In Catia: Interface Input to Rack: In the Core Audio plugin (NOT SKRYLARJACK). Now you have the Beatstep Pro communicating with Rack. Since you don’t have the outputs of Core Audio connected anything, there’s no output communication going anywhere besides the Clock out on the BeatStep Pro and the input of the interface. You want to receive the data from the Beatstep Pro to Rack to make Clocked function.

Now use Skyrlar for all your audio needs.

I’m sure this will work with any DAW that is JACK compatible. Including Ardour.

Here’s a couple screenshots to make it easier. 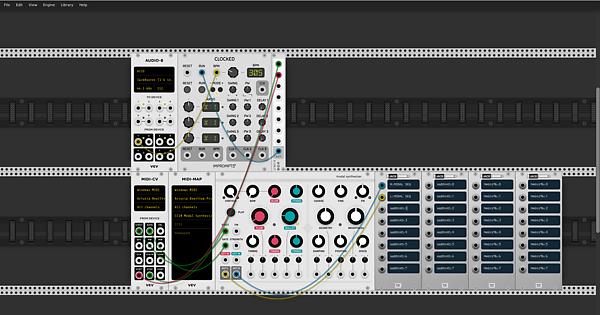 (Click on imgur image to show both as necessary)

Future Endeavors: Getting my Beatstep Pro working as a HUI device under general midi with Mixbus. Which means using midiox and scripting each parameter to function with Mixbus. I’ve done it before with my other controller. It is not too difficult if you reference other working configured scripts that work with Mixbus/Ardour.