While I’m waiting for more info about the library build environment, I’m already focused on something new.

(don’t bother downloading builds - core functionality is missing, such as most outputs) 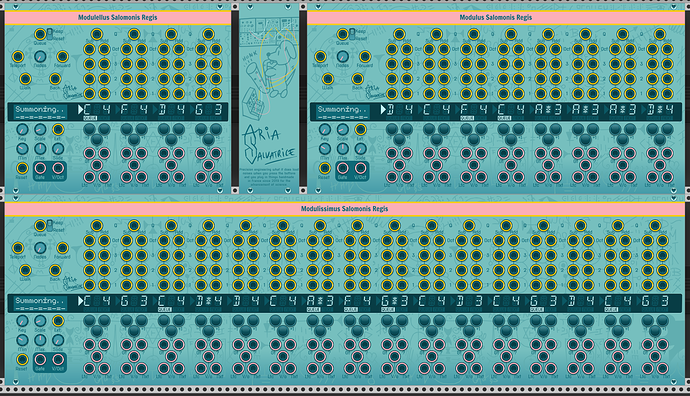 Becoming more comfortable with C++, I made it out of templates right from the start, so I could easily make multiple versions, although I think the 8 columns will be the best for most people.

It’s a self-modifying, self-patching step sequencer. When you send it a movement trig on the top-left, the rest of the inputs become active for a short window of one millisecond. During that window, simultaneous CV input can add/remove scale degrees from the current node (it wraps around), and enqueue steps.

Then, the playing step sends various continuous gates for you to self-patch back into the machine (or process with external modules): per column, one of the outputs is guaranteed to be up, one is 50/50 random, another is a latch that happens every other time, and the fourth one triggers one step late. Because they are continuous continuous gates, they will continue until the next window closes, so you can use them for self-patching.

The 1ms of delay means that the 1+ sample delay that every logic module adds is a non-issue, so long as the triggers are roughly simultaneous they will work.

At least that’s how the theory goes! Who knows if it will be even usable in practice. Only one way to know. I’m happy how it’s turning out so far, except for one easy optimization I couldn’t figure out: I can’t manage to framebuffer the segment display font, no matter what I try. Isn’t it supposed to be possible? I didn’t find good example code of someone doing it. I used the same technique (but slightly different font) to make it as Braids, which doesn’t framebuffer it. (Edit: fixed)

Finally got Modulus Salomonis Regis produce output… and it works exactly as expected! 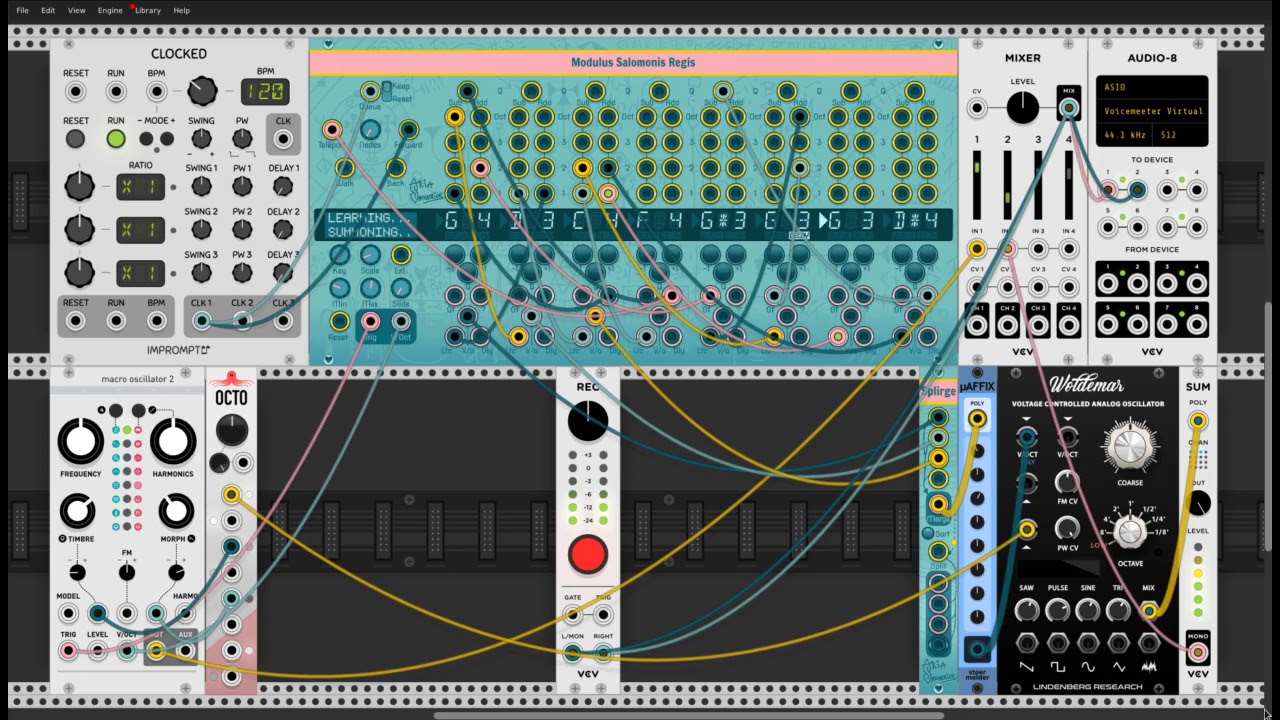 Maybe it makes more sense now it’s named after the well-known grimoire The Lesser Key of Solomon? It works primarily through self-patching. In a way, you are drawing sigils on the surface of the module to summon unpredictable, dangerous music.

If you grab automated builds, lemme know what you think! Just one caveat: many features are missing. It’s also currently hardcoded to the C Minor scale only. You can set the scale, but the LCD does not work yet, so use Quack and send its External Scale to Modulus Salomonis Regis’ external scale input.

I’m playing with it for hours now, and it’s unbelievably fun! You are a legend.

Hey, Aria. Is there a way to disable the trigger on certain steps? Kinda like a tied note?

Nope, I figure the module is busy and hard enough to figure out as it is (well, harder when there’s no doc yet lol) that I want to limit extra features, I want to encourage using logic gates and the like to break out of the box.

One possible way to do it with a few external modules: 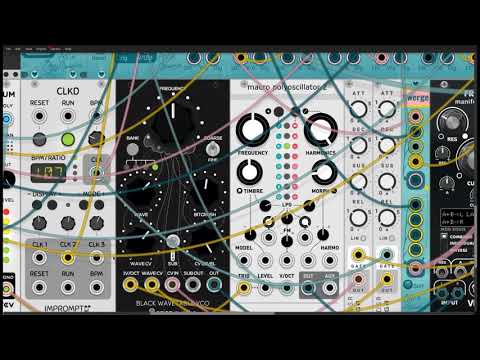 Yeah, I was thinking of the same thing, merging the gates and omitting the ones were I wanted a rest. Since we have gate outputs for each step. This is my favorite sequencer! Nothing comes close!

Edit: also you can use a sample and hold triggered by the output of the sum module to avoid having a change in pitch in the “disabled” steps. 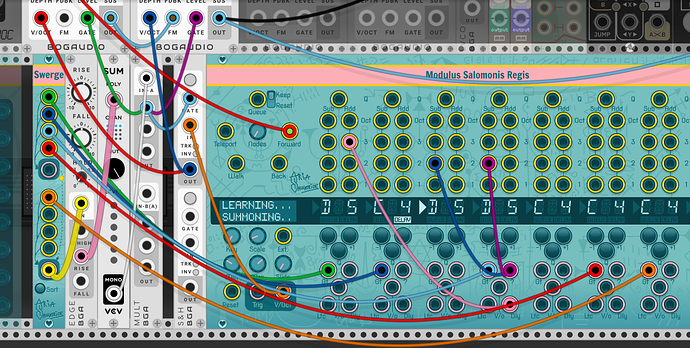 A test patch I altered to prove it’s not too hard to implement, I didn’t want to immediately refuse a feature request without verifying it’s not necessary.

The design of the module requires that individual gate outputs stay up until the very sample the next step starts, so some external processing will always be required.

BTW, I’m glad it was possible to figure out the module without a manual! But since I won’t do the docs for a few days probably, if someone plays with it, 4 things to know:

There is now a little Chord <=> Scale conversion device, called Quale, in the dev builds. It’s very simple but an important piece to realize the system of modules I have in mind.

Quatherina the Quantum Duck doesn’t experience the existence of multiple octaves, and quavers at those who purport to. She makes no distinction between chords and scales. It’s all voltage to her.

With some qualms, she humors your fancies, offering Quale: a little 3hp module to convert scales (as expressed in Qqqq’s polyphonic data bus format) to chords, and the other way around.

When you patch the Scale Input, it’s expressed on the Chord Output as a polyphonic chord on the fourth octave (0V to 0.91667V).

When you in a polyphonic V/Oct signal on the Chord Input, it’s folded to a single octave and expressed on the Scale Output in the Qqqq format, compatible with the rest of my collection.

Protip for cool kids only: Quatherina has recently taken to calling people who claim to subjectively experience the existence of multiple octaves Q-Zombies.

Lemme know what you think! Downloads from the usual place: https://github.com/AriaSalvatrice/AriaVCVModules/releases/tag/AzureCI

All my modules that work with scales support Qqqq’s representation of them: as a 12-channel polyphonic cable, where enabled semitones have a value above 0V. While the performance of encoding it as a voltage on a single-channel data bus would be higher, this polyphonic representation has the benefit of being easily user-hackable, which is much more important to me. I encourage interested developers to interoperate with this way of representing scales.

Unfortunately, integration in the library is still proving difficult, since I learned that Prototype is compiled manually rather than cross-platform, so the problem of compiling QuickJs under osxcross remains.

After I fix a few bugs I will probably do an interim forum-only announcement / stable manual install release (without the Solomon series still in development).

I noticed the add3/sub3 inputs transpose the pitch way more than 3 notes. I’m not a programmer so I could be mistaking, but shouldn’t these be 3 instead of 8/9?

Edit: Sorry, I forgot to mention that I’m talking about Solomon.

Oh right, just some stray test values I used to debug a problem and didn’t revert! My bad, pushing a fix, will be built in a few minutes.

Last few days, I’ve been working on the documentation for my modules, to replace the github README.

I’m particularly happy how I’m simulating patchcables in the browser, showing you exactly what the jacks do as you scroll:

I’ll be honest with ya, my effort was 1000% overkill compared to what’s necessary, my module docs were more of a use case for me to learn more about the vue.js ecosystem (it’s nuxt.js under the hood). I got most of the basics in place, needs a bit of polish.

If you wanna give it a spin, lemme know what you think, but please note, only the pages for Arcane and Darius exist for now, every other page will just give you an error. And for now, it only works on a big screen, it will break on phones or if the window isn’t maximized, and it consumes more CPU than it ought to.

Unsurprisingly, I’m finding out that Modulus Salomonis Regis works much better with self-patching patterns simple enough you can follow how they change.

A few interesting techniques I discovered: 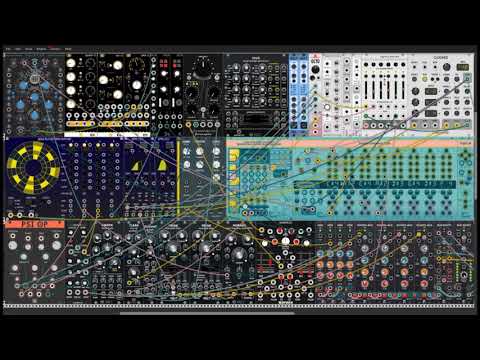 Only a few features are missing:

I encourage everyone to please start testing it heavily, and report. Lemme know if it works for you (I need a report from an OS X user!), and what you think about it.

Be sure to report any weird behavior, just be prepared for me to tell you they’re intended. For example, if you change the scale, it doesn’t re-quantize the nodes until they’re changed. That’s by design.

This version also includes a fix for the QQQQ crash when importing long chord progressions.

I ran into a bug that surprised me so much I decided to canonize it. When sending both a Walk and another type of input, there was a chance to repeat the note! This was not intended, because you can already set up this kind of behavior through self-patching, so I fixed it, but I thought it’d still be useful to expose that possibility: 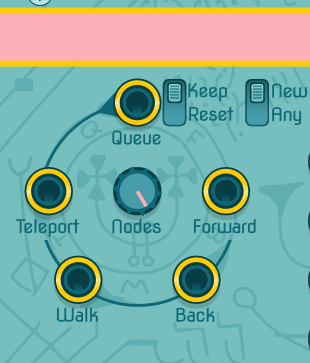 Once I release this module, I will NOT consider feature requests. It is intentionally challenging and surprising to use, to the point I feel I’ve barely started to discover myself all the fun tricks it makes possible. I want us to explore its potential before exposing more options.

So if you want to argue for changes in its behavior, do it now.

And reminder: I need confirmation it works from a Mac user.

Also, since I am writing the credits for the docs right now, I’m reminded of this, for the segment display, I’m using the DSEG font - and take a look at the author’s page, they also created a lot of cute DIY synth hardware

Hi, Aria. There’s a flicker in the display of the active step:

if you want to argue for changes in its behavior, do it now.

Okay, I was kinda hoping that triggering the reset, would reset to the first step. (Instead of doing a pitch reset) And that maybe we could have that “pitch reset” as separate inputs for each step (I know that one might be too much changes with the ui). Whatever you think is best. I love it no matter what! Amazing work. Keep it up.

The behavior in the video is intentional. The play button isn’t eye-catching enough to visualize the current step once the module is heavily self-patched.

Okay, I was kinda hoping that triggering the reset, would reset to the first step. (Instead of doing a pitch reset)

In general my thinking for this module is to provide well curated defaults that produce musically surprising results instead of a lot of toggles. Things are already sufficiently intimidating as they are. The more options I add, the more I restrict how many people will dare learn how to use it.

How did I not think of that! Thank you!

I was kinda hoping that triggering the reset, would reset to the first step.

This was intended, it not happening was a bug, fixed, thanks. As of the last build, the LCD is also fully implemented.