A minor thing about VST compatibility

I often use NI’s (free) Kontakt Player in Host. I can use it just fine, but whenever I try to clone the module or open a patch with it and Kontakt in it, I get an error message and Kontakt won’t load. It’s more of an odd inconvenience but it requires me to remember saving any changes I’ve made to the instrument within Kontakt or they’ll be forgotten. Anything I can do about this?

Writing you guys an email won’t be neccessary. It looked like VCV, whenever creating an instance of Host with Kontakt already in it (by loading or cloning), tried to load the 32-bit version that I have had in the same folder. Problem solved.

How is this possible? The patch file stores the filename base (such as Kontakt-8), so if you have two binaries in a folder, the other would need to be called Kontakt-8-x86 or something.

I don’t know. I had a folder called “32” containing (only) kontakt.dll in [screenshot of where I have my vsts]. Moving it out of there fixed the issue. 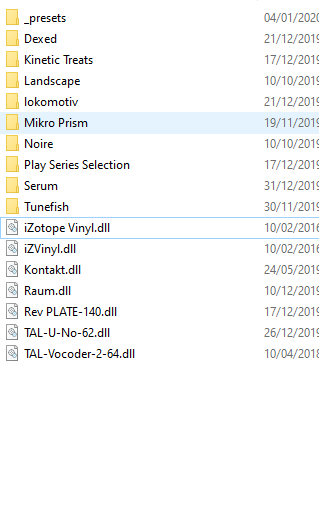 Okay, that makes sense. Two DLLs with the same name will be ambiguous. The filenames should be changed to something else, or the 32-bit versions should be moved to a directory that is not included in VCV Host’s plugin paths.

Host will give an error if using 32bit version or non compatible VST 2 version.