I am using VCV with a massive template on a FullHD screen but would like to change it to a 34" QHD (3440x1440) and I wonder how that would impact my CPU’s workload?

Anybody did the same and can share some impressions especially on CPU load?

I ask because I realized that when I switch from 60Hz frame rate to 30Hz the CPU is -4% and GPU -9%; so I can imagine that a QHD resolution could have another impact on the CPU. Right or wrong? 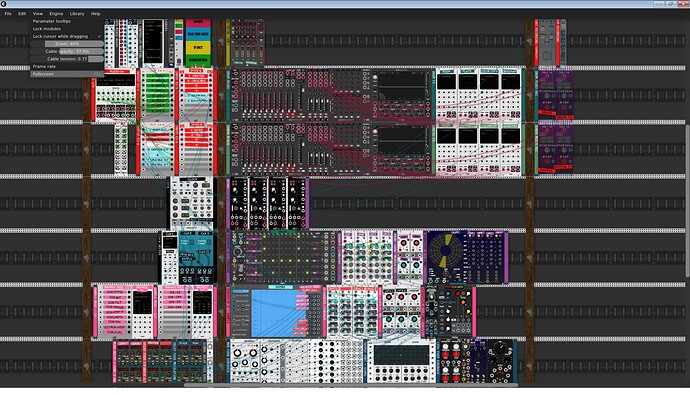 Thanks in advance, t.

would expect no higher CPU, but perhaps the GPU would have to do more work?

Im on a 4k screen. From my experience, reducing the frame rate insinde VCV rack has a huge impact on the GPU load (blinking leds at 30Hz or 15 Hz do look pretty much the same).

I am using VCV with a massive template on a FullHD screen but would like to change it to a 34" QHD (3440x1440) and I wonder how that would impact my CPU’s workload?

No one can answer a question like that accurately unless they have exactly the same hardware and the same patch. Only you can find out by trying it and measuring. Here’s how I understand things in general:

Only you can find out by trying it and measuring

Yes, as usual @LarsBjerregaard puts it very well. I agree 100%. I have a “feeling” (very un-scientific) that if you have a “decent” GPU the graphics is never an issue. What’s a “decent” GPU? oh… not the built-in intel GPU you find on a lot of laptops? My “feeling” is that if your GPU can kind of play current games you are fine. Or if you buy a new GPU, a “budget” gaming card if more than adequate.

But I don’t have much to back this up. Other than that most of the issues with GPUs here seems to be with laptops.

Oh, and I recently went from an ancient monitor to a cheap 4k. Rack is really great at “retina” resolutions like this. It would now be quite painful to go back.

Squinky, Ahorn and Lars, thanks a lot for replying and sorry for my late response.

Good to hear from you guys how this things work. I realized too that when the GPU can’t take the graphics anymore the CPU has to work for it.

The RX580 improved this drastically. CPU is at max 60°C now when VCV is doing its thing and workload at 60Hz refresh rate is around 35% at 4 cores.

Okey-dokey, I see that I have to try and find out myself, that’s a the key advice =) Thanks for chiming in!

Okey-dokey, I see that I have to try and find out myself, that’s a the key advice =)

I’m always amazed windows works as well as it does. Or at all, for that matter. What with all the gajllions.