This post is long overdue, but I wanted to give a yankee-shout-out to LU for making some very useful, though irreplaceable utilities, such as the teleport in and out modules. I’m sure there is a discussion, or more likely an argument to be had about how impossible a module should be, and I’m curious as to how the community feels about modules that could not exist in reality (I suppose with wireless interfacing where it is, these modules are hardly impossible, but I’m sure you get my point) existing in VCV.

The greater majority of modules I’m familiar with are either hardware clones, software mods based around the ideas of previously built hardware modules, or noteworthy inventions that could be recreated in the physical realm (and what some of us wouldn’t do for rack-able versions of them). There are, however a number of mods whose abilities could not be replicated with pc boards and faceplates, as well as functions of the program itself, such as those concerning patch cables, that would require a certain level of wizardry to manifest.

I, personally wish there were more of these magical creations, and wondered if anyone agreed, disagreed or better yet had some ideas to throw out there for impossible modules, no matter how far out they may be.

Teleport is incredibly useful. I use a pair at the start of every row (and sometimes for every voice) for sending clock multi/divs and run/reset. Having a consistent clocking ‘method’ and saving voices as Strips with Teleport included means the only things I need to cable when I drop a strip into a patch is the voice output to the mixer.

Strip of course takes us onto Stoermelder who is the high wizard of impossible modules. Pure genius.

Our MindMeld mixers and EQ would be pretty much impossible to make in hardware without some fairly severe restrictions of features and functionality to make things fit in the space or the invention of hardware poly cables which they rely on heavily.

I’m all for embracing the digital nature of the platform and the possibilities it allows and not imposing ‘false’ hardware restrictions - although if developers want to develop with those kind of restrictions in place that’s absolutely fine too. Plenty of room for all approaches in Rack which is one of the things that makes it so good.

I, personally wish there were more of these magical creations

Some modules you can try out:

Besides that, I think wireless connections as hardware in eurorack are perfectly feasible

I immediately thought of your modules here.

My bad, my blunder. Anyway, I will happily take @stoermelder 's post as a preemptive “your welcome” to the thank you I had intended on publicly making to stoermelder for all of their dope-ass modules. Mea Culpa.

I am honored to be on the wrong side of this righteous and merciless bitch-slapping.

As a big fan of stargate, i like to imagine Teleport as a mini portal for cv cables

. But if it was accurate to the TV show, that would mean you only have 38 minutes to finish the patch

My zat module (use it once, it’s a mute; twice, it clears your patch; the third time makes you completely deaf) was wildly unpopular. Also, it kind of looked like a…

So anywhere in the patch, the Teleport outs give me:

(Sometimes add another Gaps and Teleport for odd divisions)

Plus Run and Reset at the bottom. 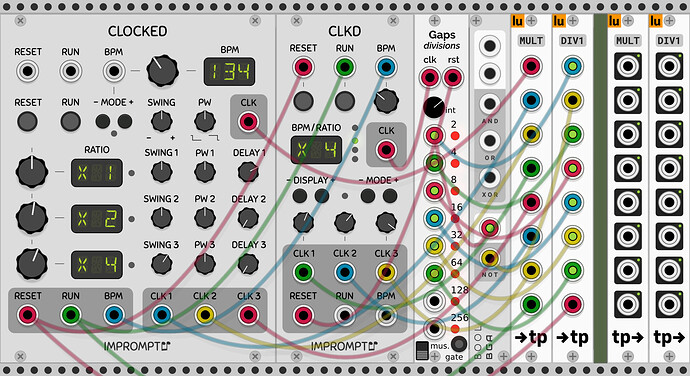